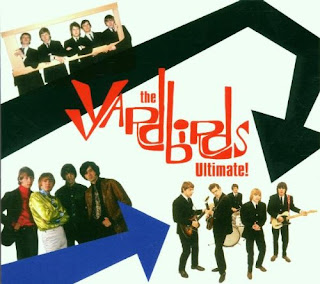 One of the truly legendary bands in rock music, it's nevertheless been very difficult for the average music fan to assemble any sort of coherent Yardbirds' collection. Back in the '60s heyday of the band, the original British versions of their albums were sliced and diced, mixed and matched, and then re-titled for release stateside. Cut-out during the '70s, collectors paid premium prices for rare copies of the Yardbirds' vinyl. During the CD era, albums disappeared and reappeared with unpredictable reliability and "greatest hits" collections, often slapped together by unscrupulous fly-by-night labels, proliferated. A lot of great music got misplaced, until the recent release of Ultimate! by Rhino Records.

For younger music fans that want to know what all the brouhaha over the Yardbirds is about, look no further than Ultimate! The two-CD, 52-track boxed collection includes an enormous booklet filled with rare photos, song credits and comprehensive liner notes and history provided by late musician/collector/authority Cub Koda. It's the music that does the talking on Ultimate!, however, the Yardbirds kicking out an original and groundbreaking mix of blues and riff-oriented blues-rock during their five-year lifespan. The band was blessed during its brief existence with not one but three – count 'em – three superstar six-string talents. Eric Clapton contributed guitar duties for one of the earliest incarnations of the band, leaving after a year and a half to be replaced by Jeff Beck. Jimmy Page joined the band as a bass player; later moving to guitar in a twin-guitar version of the band before taking over solo duties upon Beck's departure.


Ultimate! pieces together a chronological history of the Yardbirds, beginning with early Clapton-led singles and other material recorded under the direction of original manager/producer Giorgio Gomelsky. The Gomelsky "era" stretches across the first disc and includes some of Clapton's legendary original contributions to the band. Highlights include covers of John Lee Hooker's "Boom Boom" and the Ernie K-Doe hit "A Certain Girl" as well as live tracks taken from the band's debut album Five Live Yardbirds. The classic hit single "For Your Love" proved to be Clapton's swansong, the guitarist leaving the band in a huff over the song's commercial sound.

When Clapton departed to pursue a purer shade of blue with John Mayall's Bluesbreakers, Jeff Beck was recruited and joined the Yardbirds as his replacement. It proved to be a match made in heaven – Beck's improvisational six-string wizardry found a perfect chemistry with frontman Keith Relf's passionate vocals and inspired harp playing. This would be the most successful period of the band's career, as they cranked out chart-topping hits like "Heart Full of Soul," "Shapes of Things," and "Over Under Sideways Down." There were plenty of other great tunes, though, such as the rollicking B-side instrumental "Jeff's Boogie" or a raucous cover of "The Train Kept A Rollin'" recorded at Sam Phillip's Recording Service in Memphis. Beck's maniacal use of feedback, distortion, echo and fuzz created a trademark sound for the band and paved the way for a thousand-and-one late '60s garage bands to delve into psychedelica, heavy metal and endless instrumental jams.


Bassist and "musical director" Paul Samwell-Smith left the Yardbirds in 1966 to pursue a successful career as a producer, working with talents like Cat Stevens and Jethro Tull. Jimmy Page was brought in to play bass, taking over six-string duties on tour during a Beck absence. The Beck/Page line-up only recorded a couple of singles, most notably "Stroll On" from the movie Blow-Up and the single "Happenings Ten Years Time Ago," which also featured future Led Zeppelin bassist John Paul.


Over the course of seven albums, the Yardbirds earned a legacy as one of the true seminal bands in rock 'n' roll history. Their musical contributions to the genre still sound alive and vibrant thirty-five years after the fact. The band also served as an important predecessor to the formation of Led Zeppelin, arguably the most important and successful rock band of the '70s.

If I had one complaint with this set, it is in the lack of material from the band's collaboration with blues giant Sonny Boy Williamson, an inspired album that predated the superstar-laden London Sessions albums by Muddy Waters and Howlin' Wolf by a decade. Ultimate! nonetheless provides a fine history of the band, an important collection that should please both hardcore collectors and new listeners alike. (Rhino Records, released July 31, 2001)