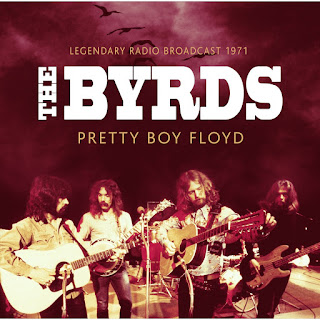 For this month’s “Bootleg Rodeo” column, the first in a couple of months, the Reverend reviews recent releases by the Byrds, Midnight Oil, and Poco with links to buy ‘em (or not) from Amazon.com.

The Byrds – Pretty Boy Floyd (Digital Legends)
Now the Reverend realizes as much as any home taper/tape trader that the further back you go in rock ‘n’ roll history, available recordings are harder to listen to due to primitive technology that resulted in shabby recordings. It seems that the basically anonymous Digital Legends label is vying with Laser Media to see who can sell the crappiest-sounding concert discs to rabid fans, and this unsourced 1971 performance by the trailblazing Byrds is one of the worse CDs, sonically, that these poor ears have ever heard (and I used to review bootleg CDs for Live! Music Review zine back in the day). Credited only to “Radio Broadcast, N.Y. 1971,” the Byrds’ Pretty Boy Floyd sounds like a poor audience taping mastered from old vinyl than anything that (presumably) WLIR-FM would have broadcast.

‘Tis a shame, too, ‘cause if the date of the performance is to be believed, the 1971 concert documented by Pretty Boy Floyd probably falls somewhere between 1970’s wonderful Untitled LP and 1971’s underrated Byrdmaniax album. The band line-up at the time included singer/guitarist Roger McGuinn, the enormously talented multi-instrumentalist Clarence White, bassist Skip Battin, and drummer Gene Parsons. The track list here draws heavily from Untitled, including gems like “Lover of the Bayou,” “Truck Stop Girl,” and the sublime “Chestnut Mare.” Only a single track is from Byrdmaniax – a lovely cover of Jackson Browne’s “Jamaica Say You Will” – and there are the expected performances of “My Back Pages” and “Mr. Tambourine Man” as well as an “Eight Miles High Jam.”

The band’s performance is spirited and quite entertaining, but the cavernous sound buries the vox and instrumentation in the depths of the mix, and there’s little definition provided White’s charming fretwork and the Byrds’ trademark vocal harmonies. You’d be much better off buying a copy of Sundazed’s Live At The Royal Albert Hall 1971, which features the same band line-up, it sounds better, and the CD offers a total of 19 songs instead of the dozen songs on Pretty Boy Floyd. The Rev’s recommendation: forget about it! 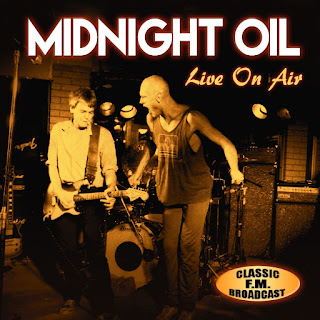 Midnight Oil – Live On Air (Laser Media)
I’ve frequently slagged Laser Media for the crappy sound of their concert CDs and, to be honest, Live On Air isn’t much different in sonic quality than the dreck typically released by the label. The sound is marginally better than previous Laser Media releases I’ve heard, or maybe Midnight Oil simply transcend the shabby source tape and lazy mixing endemic to many live discs of dodgy provenance. Midnight Oil’s Live On Air captures a truly electrifying performance by the Australian band; claiming to be an “official radio broadcast” from 1984, that would place the concert preserved by Live On Air sometime after the release of 1982’s highly-rocking 10,9,8,7,6,5,4,3,2,1 and before 1984’s Red Sails In the Sunset album.

Eight of the twelve tracks here are from the 1982 LP, and while I’m not sure whether this CD is sourced from an Australian radio broadcast or some sort of label showcase aired on American FM (Midnight Oil was barely known in the U.S. in 1984 even if they were signed to Columbia Records), the CD’s sound is a notch below horrible, but at least frontman Peter Garrett’s vocals jump out at from the sonic muck while the guitars of Jim Moginie and Martin Rotsey slice through the fog with all the ferocity of the hungry rockers they were at the time. There were a lot of great songs on 10,9,8,7,6,5,4,3,2,1 including “Power and the Passion” and the politically-charged “Short Memory,” both of which received significant college radio airplay back in the day. Tunes like “Scream In Blue,” “Outside World,” and “No Time For Games” ain’t chopped liver, though, and earlier band material like “Written In The Heart” (from the 1981 LP Place Without A Postcard), with its jagged, angular guitar licks or the chaotic rocker “Stand In Line” (from 1979’s Head Injuries) both display a different facet of the band’s talents.

I was lucky enough to see Midnight Oil perform in Nashville at the notorious Cannery venue. The band was touring in support of their 1990 album Blue Sky Mining and was still riding high on the strength of their Platinum™-selling 1987 U.S. breakthrough LP Diesel and Dust. The club was packed and the temperature well over 100 degrees – hotter than the Outback said Peter Garrett – but the band kicked out the jams nonetheless. The sound quality of Live On Air sucks a wallaby’s bum, but the band’s performance is pure dynamite and the CD offers Midnight Oil during a little-documented period of their career. The Rev’s recommendation: buy it! 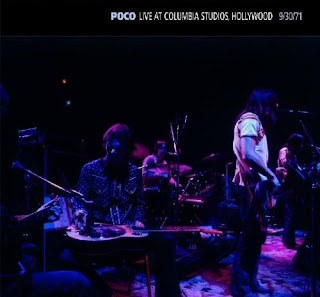 Poco – Live at Columbia Studios, Hollywood 30/9/71 (Retroworld Records)
Unlike the aforementioned Laser Media and Digital Legends labels, Retroworld is a bona fide legit operation and although they’ve released a few questionable titles over the past couple of years, the consumer is fairly well assured of getting a consistent sonic product. For Poco’s Live at Columbia Studios, Hollywood 30/9/71 the label licensed the masters directly from the band’s longtime label home, Epic Records. This live-in-the-studio performance dates to September 1971, which puts it around the time when the band’s third studio album, From The Inside, was released. The first album to feature guitarist Paul Cotton in the wake of original band member Jim Messina’s departure (to form the uber-successful Loggins & Messina), the band at the time also included frontman Richie Furay, pedal steel wizard Rusty Young (who keeps the band going today), bassist Timothy B. Schmit, and drummer George Grantham.

An underrated period of a rich decade that saw Poco release ten critically-acclaimed albums to mixed commercial success (only 1973’s Crazy Eyes would chart Top 40), Live at Columbia Studios features a half-dozen tracks off From The Inside, including the spry “Hoe Down”; Paul Cotton’s lovely, intricate “Bad Weather” and the rockin’ “Railroad Days”; and the album’s ill-fated lone single “Just For Me and You,” a gorgeous mid-tempo ballad that only climbed as high as #110 on the charts. The classic “Pickin’ Up The Pieces” is woven into a charming medley with “Hard Luck” and Buffalo Springfield’s “Child’s Claim To Fame,” the band sounding a lot like Crosby, Stills & Nash, while “C’mon,” the closest thing that Poco had to a hit single at the time, is provided a lengthy and electrifying instrumental jam.

Professionally-recorded, sound quality on Poco’s Live at Columbia Studios is befitting what is essentially a major label archive release, and despite the CD’s import status, fans can pick up a copy for a reasonable price online. Displaying the sort of pioneering country-rock sound with pop undertones that was Poco’s trademark, Live at Columbia Studios is a worthy addition to the band’s extensive catalog. The Rev’s recommendation: buy it!