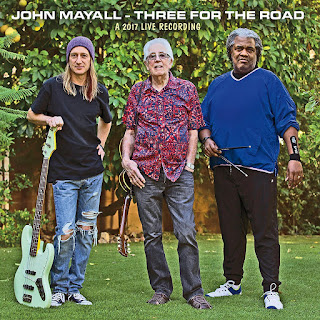 It’s no secret that the “Godfather of British Blues,” the legendary John Mayall, has made his living on the road. An energetic 84 years old, Mayall continues to tour with the zeal of a man a quarter of his age, the past couple of years fronting a lean, mean blues machine comprised of longtime bassist Greg Rzab and drummer Jay Davenport while Mayall sings and adds keyboards and harmonica to the mix. Since beginning his relationship with producer Eric Corne and his Forty Below Records imprint, Mayall has also delivered a trio of albums – 2014’s A Special Life, 2015’s Find A Way To Care, and 2017’s Talk About That – which stand proudly among the best work that Mayall has done over the course of a storied career spanning six decades (and counting).

On February 23rd, 2018 Forty Below Records will release Three For the Road, a live set featuring Mayall and his current touring trio. Recorded live in March 2017 in Dresden and Stuttgart, Germany, the album features nine red-hot performances of original Mayall tunes like “Streamline” and “Lonely Feelings” as well as covers of contemporary songs by Curtis Salgado (“The Sum of Something”) and Sonny Landreth (“Congo Square”) along with classic gems like Lightnin’ Hopkins’ “I Feel So Bad” and Eddie Taylor’s “Big Time Playboy.”

“I hope the fans will enjoy the fireworks that the three of us came up with during a subsequent tour of Europe last year,” Mayall says in a press release for the new album. “We opted for recording in East Germany purely as a convenience and availability of a recording company. They specialize in live recordings and I must say they captured the energy that took place onstage. The songs come from my extensive library of material composed by some of my favorite blues players. Naturally, my playing is featured quite a lot more than usual in this format, and I hope listeners will enjoy the performances that capture a new chapter in my live shows.”

Longtime John Mayall fans will notice that, for a bandleader notorious for discovering talented young fretburners, there is no guitarist in his current band. “I’ve been using the trio format for our live shows for a year already,” he states, “and the reason for that came about quite accidentally when my guitarist Rocky Athas wasn’t able to make a festival gig due to airline cancellations. Since then, I found that the interplay and dynamics have created a more personal upfront sound in my live performances. I can’t speak too highly of bass player Greg Rzab and drummer Jay Davenport, who have been my bandmates for the last ten years or more. Their Chicago roots are to the fore every time we get onstage together.”

Mayall hasn’t given up on including a guitarist in his band, just planning on looking over all his available options. “As for recording, I shall still be exploring the talents of guitar players who will be pretty well-known to all lovers of rock ‘n’ roll,” he says. “They will be strongly featured on the next studio album. I have already got songs lined up for our sessions in the studio at the end of this month. So look out for the prominent interplay and surprises that will be coming your way later this year. Thanks for all your support as usual. I couldn’t do it without you!”

Buy the CD from Amazon.com: John Mayall’s Three For the Road