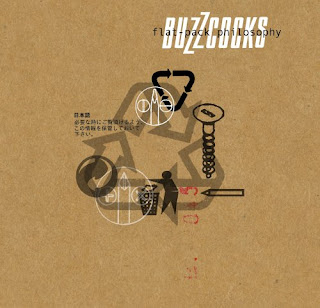 Never as nihilist as the Sex Pistols, nor social realists like the Clash, the Buzzcocks’ immense reputation was built on the band’s appropriation of the three-minute pop song for the punk milieu. Frontman Pete Shelley’s acute observations on the teenage condition, coupled with an undeniable sense of melody and a biting instrumental tact – courtesy of guitarist Steve Diggle – made the Buzzcocks one of the most influential bands to emerge from the class of ’77. If, after all this time, they’re not exactly a household name in the US, well, dammit, they should be! After breaking up in 1981, the Buzzcocks reformed a decade later around Shelley, Diggle, bassist Tony Barber and drummer Philip Barker.

This line-up has now been around longer than the original band, and they have released music every bit as memorable as those now-legendary early albums. Flat-Pack Philosophy is a perfect example of Buzzcockian rock; Shelley’s matured songwriting underlined by a fast-and-loud delivery and bold, bright instrumental hooks. Although Shelley no longer shares a teenage perspective, his romantic inclinations are no less clumsy, and songs like “Sell You Everything,” “Credit,” and “Between Heaven and Hell” showcase a wider, intellectual worldview. Altogether, Flat-Pack Philosophy blows across the current musical horizon like a gale-force wind, proving that punk rock can grow old without losing amperage, fury or attitude. One of the year’s best rock ’n’ roll albums, Flat-Pack Philosophy stands proud alongside works like Love Bites and A Different Kind of Tension. (Cooking Vinyl, 2006)

Buy the CD from Amazon: The Buzzcocks' Flat-Pack Philosophy