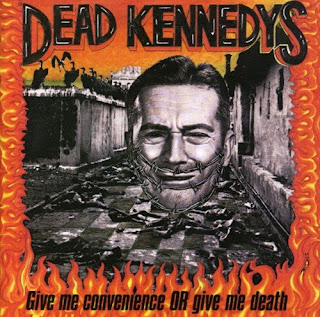 Although often overshadowed by legendary outfits like Black Flag, X or the Misfits, the Dead Kennedys were arguably one of the most important and influential punk bands in the history of the genre. They were the most political of the new breed, mixing a radical worldview with a tongue-in-cheek lyrical style and uncompromising hardcore punk chops to create a thought provoking and unique, hilariously satirical sound.

A late ’80s PMRC-inspired obscenity trial didn’t shut the band up but rather managed to censor Amerikka’s most infamous punk rock troublemakers by breaking the band apart. A decade later, the band members have gone through another (very public) break-up, with East Bay Ray, Klaus Flouride and D.H. Peligro wresting control of much of the Dead Kennedy’s catalog away from vocalist and songwriter Jello Biafra’s Alternative Tentacles label.

Give Me Convenience OR Give Me Death is one of those former AT titles, reissued by Manifesto Records with the dissenting band member’s blessing; Biafra has disavowed the reissue series entirely. A sort of “greatest hits” compilation, Give Me Convenience OR Give Me Death is a great place for the uninitiated to sample the Dead Kennedys’ experience firsthand. Some of the band’s best material is collected here, including early songs like “Police Truck,” “California Uber Alles” and “Holiday In Cambodia.” A killer cover of “I Fought The Law” shows the band’s retro chops while a Biafra rant, “Night Of The Living Rednecks” foreshadows Jello’s spoken word career.

Old hardcore DK fans probably already have this title on vinyl or CD, but the reissue does offer cleaner sound via digital remastering and a 32-page reproduction of the album’s accompanying booklet, including song lyrics and Winston Smith artwork. I’d recommend Give Me Convenience OR Give Me Death for new fans, and would suggest that if you like this stuff, you should check out Fresh Fruit For Rotting Vegetables, the band’s best album and the lone title still available on Alternative Tentacles. (Manifesto Records, 2001)

Buy the CD from Amazon: Dead Kennedys' Give Me Convenience OR Give Me Death