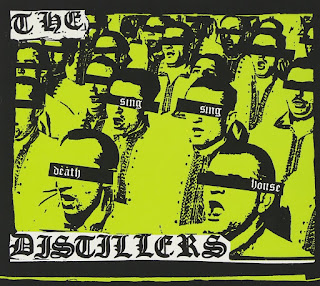 Contrary to what many people believe, punk is as much a philosophy as it is an attitude. Fashion doesn’t really have shit to do with it, ‘cause it don’t mean a thing if it ain’t got that swing, ya know? You can spike your hair higher than Pamela Anderson’s silly-putty funbags, pierce your face with every safety pin in your mom’s sewing kit and wear all the ripped band t-shirts that you want and it doesn’t mean dick. Meanwhile, you can go to work every day of your life wearing khaki chinos and a button-down oxford shirt and still have a head full o’ evil punk rock thoughts.

Brody Armstrong of the Distillers is an authentic punk rock poster child, and don’t you forget it pal! Possessing a voice that sounds like Joan Jett tossing down steroids with a strychnine-laced whiskey chaser, Armstrong walks the walk and talks the talk like few rockers have been able to. And don’t believe for a minute, buttercup, that Ms. Brody got her recording gig courtesy of husband and fellow punk-for-life Tim Armstrong of Rancid. The Distillers kick out the jams with every bit as much muscle, ferocity, spit and vinegar as any hardcore posse out there today. If you don’t believe me, throw Sing Sing Death House on yer measly little boombox and get ready to dodge the chunks of plaster falling from your ceiling for the next thirty minutes.

Listening to Sing Sing Death House, one gets the distinct impression that for Armstrong, punk is more than a way of life, it’s also an escape from this mundane mortal vale. When Armstrong asks “are you ready to be liberated” at the beginning of the “The Young Crazed Peeling,” you know that homegirl isn’t whistling Dixie (which would be hard for her to do anyway since she’s from Australia...) Much like Rancid, Brody’s Distillers bring a decidedly populist bent to their material – Armstrong isn't a particularly poetic songwriter, but she is an effective one, and certainly not beyond throwing out a tortured growl if needed to express her feelings.

Much of the material on Sing Sing Death House is autobiographical in nature, drawn from Armstrong’s life and experiences, which is partially what makes it so accessible. “Sick of It All” tackles the question of violence that punk rock is often accused of while “City of Angels” takes aim at LA urban decay. “Seneca Falls” picks up the torch of women’s liberation while the aforementioned “The Young Crazed Peeling” is a personal tale of rage and retribution.

All of the songs are delivered with an energetic, high-voltage hardcore hum, the Distillers cutting through all the bullshit to deliver raw, unadorned, honest-to-god punk rock thrills. At the end of the album, either you got it or you didn’t. Personally, I couldn’t give a shit either way; I’m going to listen to Sing Sing Death House again... (Hellcat Records, released February 12th, 2002)