Archive Review: Shane MacGowan and the Popes’ The Snake (2000) 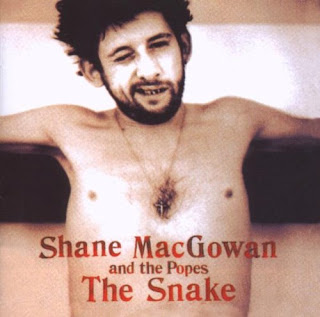 When friends and fellow critics argue U2’s dubious status as the greatest band to come out of Ireland, I not so politely disagree. The Pogues and the Undertones both are genuine Irish working class artists, and at their worst either band could nonetheless easily teach Bono and crew a thing or two about the true spirit of rock ’n’ roll. If my money was on the line, I’d lay it all down on the Pogues above U2 every time (with the ’tones being my second choice over the self-obsessed, pretentious wankers that U2 sadly became).

Shane MacGowan and the Popes’ The Snake


Shane MacGowan was the undeniable heart and soul of the Pogues, a hard-drinking rock anti-hero who consistently flirted with self-destruction even while the band tottered on the edge of stardom. MacGowan’s departure leveled the band, and even if the Pogues’ swan song, Waiting For Herb, was a vastly underrated jewel of an album, MacGowan’s presence – or lack thereof – was sorely missed. MacGowan brought to the band a sort of reckless abandon and joyful lustiness far too often missing from rock these days.

Gladly, MacGowan has gotten his shit together enough to toss a band into the studio and crank out The Snake, the best album that the Pogues never made. Although there are some slight stylistic differences between the fifteen songs found on The Snake and those of MacGowan’s former mates, his charismatic musical presence creates an uncanny similarity. Lyrically, The Snake shows MacGowan at his very best, with autobiographical songs like “The Church of the Holy Spook” and “Nancy Whiskey” taking a good, hard look at the lifestyle that almost killed him. Others, like “A Mexican Funeral In Paris” or “I’ll Be Your Handbag” are well-written vignettes, story-songs with a personal edge that are almost poetic in their retelling, reminiscent of artists like William Burroughs or Jack Kerouac.


Musically, The Snake is pretty much what one might expect, a brawling, muscular blend of punk rock, classic blue-eyed soul and traditional Celtic roots, with MacGowan’s guttural, coarse, heavily-accented vocals a primal force that many find to be an acquired taste. The Snake is a marvelous comeback album from MacGowan, a lively and uncompromising effort from one of rock’s unheralded geniuses. (ZTT/Warner Bros, released May 9, 2000)

Buy the CD from Amazon: Shane MacGowan and the Popes’ The Snake