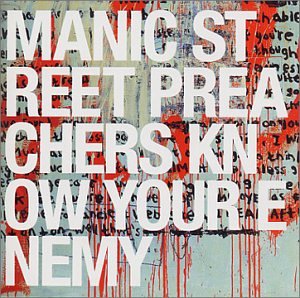 In the ever-changing Britpop genre, where longevity isn’t a well-known character trait, the Manic Street Preachers have nevertheless managed to forge a decade-long career. From their early ’90s punk guise as “generation terrorists” to a millennial role as popular arena rockers, the Manic Street Preachers have become the respected graybeards of the British pop/rock scene.

Along the way, they have struggled through controversy, sorrow and fleeting trends to emerge as one of the most successful British bands in recent memory. The one thing that has eluded them, however – stateside success – won’t be won with Know Your Enemy, a mixed bag of style and performance.


Know Your Enemy opens with a “Suffragette City” inspired roar that propels “Found That Soul” dangerously close to the “raucous and roll” turf inhabited by harder rocking bands like Dogs d’Amour or Hanoi Rocks. James Dean Bradfield’s guitar stings and buzzes like a six-string hornet’s nest while the background rhythm crashes and tumbles behind his vocals. Unfortunately, “Found That Soul” bleeds into “Ocean Spray,” an aggravating piece of shite with wimpy vocals and nonsensical lyrics.

The remainder of Know Your Enemy is a similar roller-coaster ride, mixing breathless rockers like “Intravenous Agnostic” and “Dead Martyrs” with bland pop tripe that wouldn’t pass muster with the most fervent Anglophile. It seems as if the band is trying to reconcile the success of its present with the street credibility of its past, leading to this choppy, frequently ill-conceived collection of songs. When the band rocks, they raise the roof like few others bands can. When they fall down, however – such as with “Miss Europa Disco Dancer” – they are truly embarrassing.


The 1995 disappearance of original lyricist and guitarist Richey James has certainly affected the band, although not as much as some critics claim. The Preachers quartet that included Richey James and the post-James trio that carried on after his mysterious disappearance are two quite different outfits. James’ growing mental illness, penchant for self-mutilation and politically charged lyrics made for a flamboyant and electric style of music, and early Preachers’ albums and bootlegs are prized by their fans.

The post-James band has created their own sound in his absence, incorporating their early random madness with a slicker, more professional pop structure. This direction has led to a certain degree of success that they might never have enjoyed with James running the show. These days, however, the Manic Street Preachers seem to be a band in the midst of an identity crisis, too seldom sounding truly manic and, with Know Your Enemy, preaching only to the faithful. (Virgin Records, released April 24, 2001)

Buy the CD from Amazon: Manic Street Preachers’ Know Your Enemy
Posted by Rev. Keith A. Gordon at Thursday, August 01, 2019