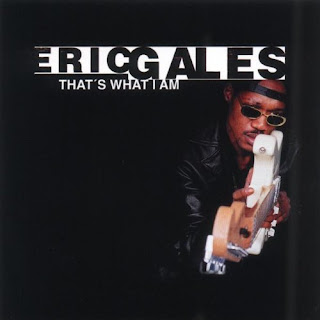 Like most African-American guitarists who dare to cross over onto rock ‘n’ roll turf, Eric Gales has suffered from comparisons to guitar legend Jimi Hendrix. Like Hendrix, Gales is a left-handed guitarist with a taste for hard rock. Early acclaim laid the dreaded “guitar hero” mantle on the young artist, Gales recording his self-assured, self-titled debut album in 1991 at the tender age of fifteen. He followed it up with Pictures of A Thousand Faces just two years later. Although both albums were heady efforts, the sides show that Gales was prone to overextending himself, jumping headfirst into a song with youthful abandon, six-string Hendrixisms flying off the grooves recklessly.

Since the early days of his career, the young Memphis guitar prodigy has honed his skills, worked with a diverse range of musicians, including former Warlock babe Doro, new wave popster Howard Jones, and hardcore rappers Eight Ball & MJG. As shown by That’s What I Am, the experience has done Gales well. A knowledgeable rock ‘n’ roll veteran in his mid-twenties, Gales is more restrained these days, but not afraid to put the boot to it when it's time to kick out the jams. Just the first two songs on That’s What I Am – the title track and “Hand Writing On the Wall” – contain more fretboard gymnastics and six-string pyrotechnics than you'll hear from a dozen hard rock bands.

The difference is that Gales weaves his solos more carefully these days, incorporating them into the groove rather than allowing them to dominate the song. The result is a looser set of songs that allow Gales’ other musical influences to shine through the mix. “Down Low,” for instance, is a slipping-n-sliding chunk o’ Sly Stone-inspired funk that will have your toes tapping while “Blue Misty Morning” takes a page from Robin Trower’s playbook with spacey, multi-layered guitars sharpening the edge beneath Gales’ soulful vocals. With half-spoken, half-rapped vocals laid down on top of a staccato guitar riff, “Insane” is crazed with bold braggadocio and hometown name checking. Gales leaps into “Black Day” with both feet, notes falling from the fretboard like lightning hitting a Kansas cornfield. “Can’t Go On” is a gentle ballad with tasteful background vocals from, of all people, Josie Cotton (check early ’80s new wave pop obscurities for mention of the talented Ms. Cotton).

Hendrix comparisons be damned, Gales tackles the master’s “Foxey Lady” with a joyful playing that redefines the song, bringing a more contemporary sound to the rock classic. That's What I Am’s other cover, of ZZ Top’s “Just Got Paid,” takes the blues-grunge of the original to new heights, sounding even dirtier and funkier than the Texas trio’s worst nightmares, Gales’ six-string razor roaring out of your speakers. That’s What I Am benefits from the production skills of Geza X (Black Flag, Dead Kennedys), who brings a hard edge to the songs that frames Gales’ skills perfectly. The result is a rocking and rollicking disc, That’s What I Am a guitar-lover’s dream come true. In one final nod to the ghost of Hendrix, Eric Gales is also the first artist signed to Nightbird Records, the new label formed by the Hendrix estate. (Nightbird Records/MCA Records, 2001)