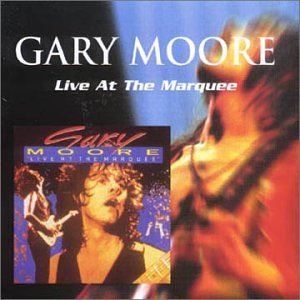 One of British rock’s greatest secret weapons, Gary Moore has never received the attention or props that he deserves as one of the Emerald Isle’s wildest and most talented guitarslingers. It is certainly not his immense skills that have prevented him from gaining more than a token stateside audience, although his penchant for skipping from project to project might provide some reasons for his obscurity. After fronting the early ’70s British blooze-rock outfit Skid Row, Moore banged out hard rock with Thin Lizzy, flirted with jazz/fusion as a member of Colosseum II, and played on solo albums by folks like Cozy Powell and Greg Lake. Moore’s own solo efforts have run the gamut from heavy metal to improvisational jazz to hardcore blues. For all of his genre hopping, Moore might be pegged as a dilettante but for the fact that no matter the style of music, he plays it so damn well...

Live At the Marquee is taken from a 1980 show captured at London’s Marquee Club and is probably as good a representation of Moore’s six-string skills as one might find. Although this critic personally prefers the blues bashing Moore practiced during the ’90s, the metal-tinged rock and jazzy fretwork found on Live At the Marquee is nevertheless impressive. Fronting a band that includes journeyman MVP drummer Tommy Aldridge, the Irish guitar wizard runs through a set that includes the hard-driving title cut from his 1979 solo album, Back On the Streets and the wonderfully sublime “Parisienne Walkway,” Moore’s first U.K. hit. “Run To Your Mama” rocks with a rabid ferocity, Moore’s lightning-quick runs highlighting an otherwise generic “kiss-off” song while “You” plays like melodic new wave pop. The soaring, operatic “Nuclear Attackv and the thrash-and-bash instrumentation of “Dallas Warhead” (with Aldridge’s manic drum solo) close out Live At the Marquee with a proper showing of Moore’s heavy metal skills.

Although Live At the Marquee probably won’t win Gary Moore any new fans, standing miles away stylistically from his latest release – the bluesy, bone-rattling Scars – the album does serve as a solid documentation of Moore’s early work. Hopefully this reissue will herald a complete revamping of Moore’s ’80-era hard rock catalog by Sanctuary, which very well might attract listeners searching for a new guitar hero in this age of limp, lifeless “modern rock.” Gary Moore is a guitarist of unusual skill and dexterity, a six-string virtuoso capable of great subtlety, power and speed. He deserves a much wider hearing in the United States. (Sanctuary Records, 2002)

This recording is amazing!!! Gary and Tommy Aldridge are on fire!!! I've been listening to this since it came out. Originally had the Japanese import wish I still did