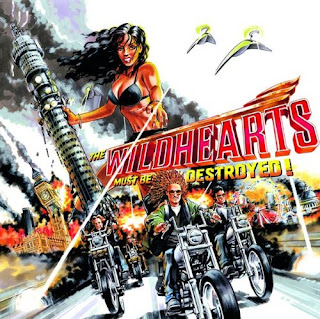 Long before the Darkness were credited with reviving the spirit, if not exactly the substance of “glam rock,” British bands like the London Quireboys, Dogs D’Amour, and the Wildhearts kept that glittering flame alive. Drawing on influences such as the Rolling Stones, the Faces, and Marc Bolan’s T-Rex, the riff-happy Wildhearts and their brethren created some of the most energetic and lively rock music of the ’90s. Unfortunately, outside of the U.K. only a few hardcore American Anglophiles knew squat about these bands, none of which made a dent on the Seattle-dominated mid-’90s rock scene. After enjoying almost a decade as the monarchy’s favorite bad boys of debauchery, the Wildhearts called it a day...

After a handful of years pursuing the brass ring with other bands, Wildhearts’ mastermind and frontman “Ginger” decided to reconvene the original band line-up in 2001. Ginger reunited with guitarist Chris Jagdhar and drummer Andrew “Stidi” Stidolph, recording the tentative Riff After Motherfucking Riff EP for release in Japan. The experiment must have paid off as the band released its official “comeback” CD – The Wildhearts Must Be Destroyed – in England in 2003. After years of being ignored by American audiences, the disc was released stateside earlier this year. A successful U.S. tour opening for the Darkness increased the band’s profile among American rockers, and the subsequent release of the newly-minted, full-length Riff After Riff on Gearhead has the Wildhearts primed for a potential breakthrough.

The Wildhearts Must Be Destroyed is a transitional album. The band works hard to find a balance between its Glam-rock roots – a mix of Slade-styled bombast and Sweet-flavored riff-rock – and the harder-edged influences of the Stones, pub-rockers like Dr. Feelgood, and various “new wave of British metal” bands. The pop/rock side of the band wins out here, broadcast-friendly tunes like “Vanilla Radio” and “So Into You” seemingly written specifically to appeal to radio audiences. “There's Only One Hell” offers some stellar guitar interplay and a killer hook, Ginger’s vocals sounding like Nick Lowe while the band sounds like Cheap Trick, or maybe Rockpile. The engaging “Top of the World” opens with Jagdhar’s razor-sharp six-string work before tumbling into a joyous blend of vocal harmonies and driving rhythms.