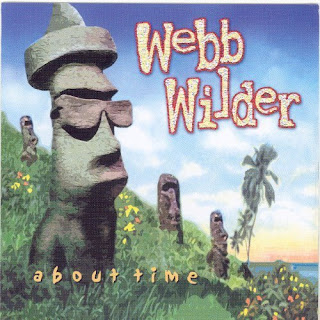 It’s been nearly nine years since Webb Wilder last came ’round these parts with a new phonograph recording and we’ve all been that much poorer for his absence. Heck, during the great one’s hiatus we’ve suffered through nu-metal, modern rock, Britney Spears, boy bands, and Geo. Bush – a veritable cultural famine of Biblical proportions. You don’t have to tie up that noose and throw it over the rafters just yet, bunkie, ’cause our year is about to get a whole lot “wilder” and this scribe can only exclaim that it's “about time!”

Rounding up his “A” Team of veteran players, musical monsters like guitarist George Bradfute, bassist Tom Comet, and drummer Jimmy Lester, Webb Wilder has again hooked up with his long-time partner in crime, the “Ionizer,” R.S. Field to record About Time. As comeback albums go, it’s really like ol’ Webb never left; you can’t really call these grooves a “return to form” because Wilder has never abandoned his pure, untarnished vision of rock ‘n’ roll with a touch of country and blues. Sure, Wilder spices up the brew now and then with some fine brasswork courtesy of Dennis Taylor and Steve Herrman, the band sounding like some R&B revue of old. Overall, old time fans of the “last full-grown man” won't be disappointed by the track selection found on About Time.


For those of you unfamiliar with Webb Wilder, or those who only know him through his XM satellite radio program, About Time will hit you like that first kiss in the backseat of your daddy’s jalopy. The songs on About Time stand as tall as the singer, a fine combination of roots-rock and Southern-fried influences. “Scattergun,” for instance, is a somber, Marty Robbins-styled old west tale of tragedy while “Battle of the Bands” is a ’50s-flavored rockabilly rave-up with rollicking horns and swinging rhythms. “I Just Had To Laugh” is a typical, old-school Field/Wilder lyrical collaboration about the trials of romance, offering plenty of clever wordplay, Wilder’s magnificent baritone, and some mesmerizing fretwork from Bradfute.

“Miss Missy From Ol’ Hong Kong” is a roadhouse rocker with Steve Conn channeling the spirit of a young Jerry Lee on the ivories. As Wilder speaks of Missy’s many attributes, the rest of the band teeters on the edge, blowing the roof off the mutha with instrumental interplay as tight as a fist and honed to a surgical-edge by 1,001 nights spent performing on the road. Wilder reworks Tommy Overstreet’s early ’70s country classic “If You're Looking For A Fool” with a heartbreaking, bittersweet tone that is punctuated by Bradfute’s sadly weeping guitar. Kevin Gordon’s excellent “Jimmy Reed Is the King of Rock and Roll” is provided a bluesy, ethereal reading that brings to mind John Campbell’s voodoo king, knee deep in the swamp, howling at the moon while Hank’s ghost-driven Cadillac careens around a corner, down Broadway, and away from the Ryman.


There’s more, but you’re just going to have to pick up a copy of About Time for yourself and discover the mystery, the madness, and the magic of the man called Wilder. Giants standing proudly above lesser talents, Webb Wilder and the Nashvegans deliver a tonic for these troubled days and times in About Time. Welcome back, boys! (Landslide Records, released April 24, 2006)