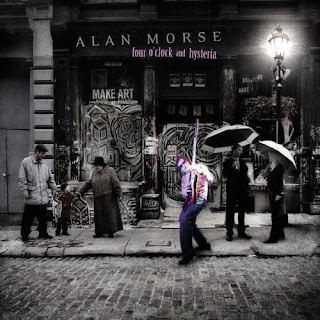 Guitarist Alan Morse is almost exclusively known for his day job as a founding member, along with his brother Neal, of neo-prog legends Spock’s Beard. Over the past 15 years, Spock’s Beard has risen to the top of the modern prog world, the band’s ever-evolving sound splashed across nine studio albums and half-a-dozen live sets. Nothing if not prolific, Spock’s Beard has helped define prog-rock for a generation of fans, and Alan Morse’s nimble fretwork and creative talents are a major element of the band’s trademark sound.

Through the years, however, Morse had never found the time or inclination to record a solo album. Our loss, really, because as a player Morse is perhaps one of the most underrated axemen in the world of rock music, no doubt overlooked by the critical intelligentsia because of his “progressive” background. No matter, really, because Morse’s first solo album – Four O’ Clock and Hysteria – has arrived, and guitar fans everywhere are going to have to sit up and take notice. If you’re impressed by the likes of Jeff Beck, Steve Vai, Paul Gilbert, or Joe Satriani, then you’re going to kick your own ass ‘til it turns blue when that snot-nosed little punk from down the street – the one with the black-dyed hair and nose-ring – THROWS Alan Morse’s solo debut in your face!


Freed of the constraints of the band dynamic, Morse was able to go nuts and CUT LOOSE on Four O’ Clock and Hysteria, unleashing his inner improviser and exploring the depths of his considerable talents. Um, I’d say that it worked; admirably, actually, with Morse merging disparate styles and instrumental genres into one giant mofo six-string workout. With brother Neal at the boards to capture every passing nuance, Morse tosses bits ‘n’ pieces of rock, prog, jazz, and blues into the blender, turns the button over to “shred” and hits that sucker with a mallet. The resulting instrumental gumbo evokes memories of notes, riffs, and magical moments from a dozen legendary six-string wizards, ranging from the Yardbirds troika of Clapton, Beck, and Page to Duane Allman; from Al DiMeola, Shuggie Otis and Ernie Isley to Rory Gallagher, as well as modern-day guitar heroes like Vai and Satriani. Morse takes ‘em all, adds his own indelible stamp, and makes it all new again.

Morse is joined here by his mates from Spock’s Beard – bassist Dave Meros, drummer Nick D’Virgilio, and keyboardist Ryo Okumoto, impressive talents all – as well as by some friends from the CCM community, in-demand session players like bassist Gary Lunn and drummer Scott Williamson and, of course, his multi-instrumental brother Neal Morse. With his first album, Morse delivers a dozen complex, energetic and creative instrumental songs that illustrate his amazing skills and diverse creative chops. “Cold Fusion,” for instance, is a trippy little slice o’ space funk, with a constantly-shifting electronic buzz laid down behind Morse’s fluid leads, Okumoto’s keyboard riffing providing an excellent counterpoint to Alan’s squiggly lines.

The atmospheric “R Bluz” has an underlying Brit blooze-rock feel to it, Morse tearing off some Claptonesque tones while either Neal or Ryo kicks the keyboards until all sort of icy-cool psychedelic-jazz notes come tumbling out. The deceptively soulful “First Funk” is actually a mellow, but powerful instrumental jam, the kind of ethereal, R&B-tinged tune that we used to enjoy back in the late ‘70s. “Dschungel Cruz” includes some funky syncopated rhythms behind Morse’s screaming leads while “Spanish Steppes” is an intricate, delicate composition, its rich tones and subdued instrumentation matched by D’Virgilio’s tasteful drumming and Morse’s Mediterranean-styled playing. The album-ending “Home” has a melancholy, almost wistful feel, with Alan’s layered guitar tracks creating a rustic vibe over the top of gentle percussion and Neal’s sparse mandolin work. In the end, the notes come tumbling down like rain, every lick shimmering through the speakers with a painfully beautiful sound. “Home” would be a great song to end a movie with, its instrumental grandeur shining as the credits roll. In this aspect, it reminds me a lot of Mark Knopfler’s soundtrack work for The Princess Bride.


Alan Morse’s Four O’ Clock And Hysteria will naturally be embraced by the Spock’s faithful, as well as by prog-rock fans in general, but the album’s innovative instrumentals and Morse’s undeniable six-string talents would also hold strong appeal to any music lover that appreciates fine guitar playing. If you have yet to discover Alan Morse, Four O’ Clock and Hysteria is your entry drug of choice…be forewarned, though, because once you hear this stuff, you’ll be forced to jump into the Spock’s Beard discography. After that, who knows? (Inside Out Music, released 2007)

Review originally published by the Trademark of Quality blog, 2007