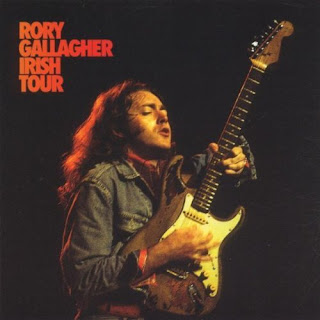 As recounted in our reverent review of his seminal BBC Sessions set, Rory Gallagher was a hell of a guitarist, a gifted artist with one foot in rock ‘n’ roll and the other solidly in the blues. As a handful of legitimate live albums and dozens of bootlegs would attest to, Gallagher was at his best when onstage. This Buddha Records reissue of Irish Tour showcases the artist at the top of his game, a six-string guitarslinger without peer who could tear off blistering riffs and crunching chords with lightning fast ability, a powerful showman holding the audience in the palm of his hand.


The performances on Irish Tour were taken from shows done in Belfast, Dublin and Cork during January 1974. Gallagher was an Irish homeboy who had made good, a star of significant drawing power throughout the European continent. Because of the violence and chaos in Northern Ireland, however, most artists refused to play the region, leaving audiences starved for rock ‘n’ roll. In this environment, Gallagher came home, causing everybody to forget their differences for a while. Consisting mostly of familiar songs drawn from previous Gallagher studio albums, Irish Tour nonetheless offers up a handful of inspired covers alongside the scorching originals.

Among the highlights of Irish Tour’s ten tracks are a soulful cover of Muddy Water’s “I Wonder Who,” which includes some sparse tho’ well-placed guitar licks, and a simply unbelievable rendition of the crowd favorite “Tattoo’d Lady” that showcases Gallagher’s considerable six-string skills alongside some tasty keyboards from Lou Martin. A funky, down-and-dirty cover of J.B. Hutto’s “Too Much Alcohol” will knock you on your ass every bit as quick as a pint of Old Crow whiskey. With flaming keyboards behind him, Gallagher knocks out a firey, hard rocking version of “Walk On Hot Coals” that includes an extended instrumental jam while “Back On My Stompin’ Ground” is a cajun-fried slab of Southern-styled funk that is razor sharp and sonically dense as a bayou fog.


Gallagher would go on from this performance high to play hundreds of shows and record dozens of albums during a career that stretched across a quarter-century. Although he always delivered the goods on stage, never again would he play with such feeling and fire in a series of performances that would mean so much. With a talent the equal, not less than contemporaries like Jimmy Page or Eric Clapton, Rory Gallagher was a true rock ‘n’ roll treasure. (Buddha Records, released September 7, 1998)