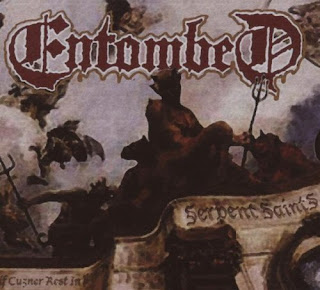 I swear, I put this thing on the box and sparks started flyin’ like ball lightning. The low bass kicked in, bouncing off my head like a concrete police baton and then the guitars – those damn guitars – started to shred my eardrums like a hungry carnivore tearing into a hot meal. Yeah, verily, I speak of the mighty Entombed, Swedish purveyors of black noise most disturbing and yet alluring. Serpent Saints is the hallowed band’s new album, a return to the magnificent metal onslaught of 2003’s Inferno and a gut-busting, liver-shaking, migraine-injecting exercise in tension in its own right.


Serpent Saints kicks off with the title track, a deceptive bit of hallucinogenic, hypnotic six-string noodling leading the listener down a dark path on a rainy night, the drums kicking in like thunderstorms on the horizon…and then L.G. Petrov’s werewolf-like vocals kick in and the guitars assault your ears like a concussion grenade. “Serpent Saints” and its follow-up, “Masters of Death,” both flex the band’s thrash muscles, getting good and limber to better drop to the ground and limbo dance across the low-frequency, bass-heavy doom-like soundscapes of “Thy Kingdom Coma” and “Amok.”

If the first four of the ten monster tracks on Serpent Saints haven’t caused you to wet your bed and dive beneath the mattress in horror, wait until yer hungry lobes get snatched up by the razor-sharp fishhook of “Warfare Plague Famine Death,” a tasteful tune straight outta the Four Horsemen’s fakebook, the wiry, tense, demonic six-string pyrotechnics scatting around your cranium like a thousand bloodsucking locusts. Yowsa!

“The Dead, The Dying, And The Dying To Be Dead” is an impressive cross between Sabbath-inspired riff-laden doom and classic Entombed death ‘n’ roll, with galloping drumbeats, bass to beat you over the head with, disturbing fretwork, and lyrics so angry one wonders why Petrov’s head doesn’t burst into flames when he sings ‘em… “Love Song For Satan” is just plain ooky-spooky, cult voices heard beneath a fog of ambience when the song goes all scratchy and industrial with backwards vox and arcane refrains and found sounds and metallic crashing and, well, you’ll certainly be headed for hell in a handbasket of your own weaving if you listen too closely to this song, kiddies…and I’ll see you there!


Entombed has often been criticized by notoriously tight-minded death metal fanatics for the band’s frequent experimentation in other less…shall we say…metallic endeavors. The result is always the same, however – the band takes a trip down a stylistic side street of its choosing, expands its musical palette, and returns to metal with its batteries recharged and its instruments set on stun, stomp and blister.

After their intriguing (and enjoyable) dalliance with classical ballet forms on Unreal Estate, Entombed has eagerly jumped headfirst back into the abyss with Serpent Saints, an album every bit as stone-crushingly powerful as anything these talented Swedes have ever recorded. (Candlelight Records, released June 25, 2007)

Originally published by the Trademark of Quality blog, 2007