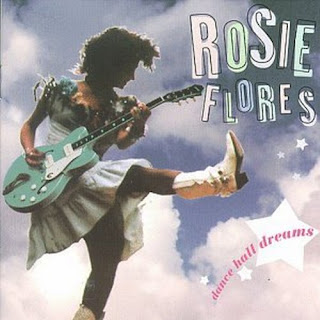 Rosie Flores has come a long way since her mid-eighties stint as guitarist for flamboyant female cowpunkers the Screamin’ Sirens. Over the past decade and a half or so she’s managed to build a career and a fine rep as a better-than-average songwriter and a skilled six-string maestro – such a good reputation that she was asked to tour with western swing aficionados Asleep At The Wheel as their guitarist. A handful of solo albums has served as solid credentials for an artist too traditional for Nashville yet too country for the rock world.


As shown by Dance Hall Dreams, Flores’ recent Rounder Records release, there’s still quite a fire burning in this lass and if Music Row is too blind to notice it, well, this critic isn’t. Dance Hall Dreams is a wonderful collection of performances, a fresh breath of country-flavored artistry that is at both tough and tender, emotional and intellectual.

Dance Hall Dreams opens with a nifty little piece of western swing titled “Little Bit More,” a funny bit of bragging that stands up even after repeated listens. The mournful “Tremolo” and Flores’ touching song about her father, “Who’s Gonna Fix It Now” are both radio-ready hits if country radio wasn’t so petrified by trends and bad taste. Flores’ cover of “Funnel of Love” is a rocking little number that stays true to Wanda Jackson’s original while “Bring It On” is a swinging little love song propelled by Flores’ come-hither vocals and some tasty pedal steel. “It Came From Memphis” tackles the birth of rock ‘n’ roll and along the way name-checks some of the great talents of country and rock both, including Sonny Burgess, Scottie Moore, Johnny Cash, Jerry Lee Lewis, and Carl Perkins.


In her heart, Rosie Flores is a country traditionalist, masterfully blending elements of 1960s-era honky tonk with western swing and roots-rock. A charismatic and energetic performer, a fine songwriter and a guitarist of some style and imagination, Flores deserves a much wider audience than her indie label efforts have brought her. If there were anybody in Nashville with the intelligence to recognize her talents and with the guts to sign Flores to a major label deal and promote her, the results would be phenomenal. Commercial country music could only benefit from a wider audience entertained by an artist of Flores’ talents and passion. (Rounder Records, released March 2, 1999)