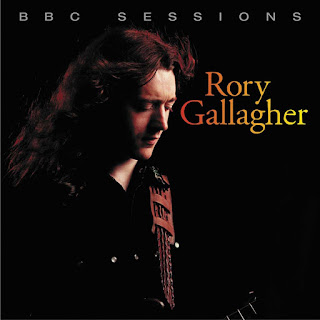 He never played with one of John Mayall’s legendary bands, nor did he go through the revolving door that was the Yardbirds’ lead guitar slot. He’s a contemporary of folks like Eric Clapton, Jimmy Page, and Jeff Beck – the holy trinity of British blues guitarists – but has never enjoyed the kind of semi-legendary status conveyed upon those three artists. Much like Gary Moore, another fine axeman, guitarist Rory Gallagher has attracted a cult following; unlike Moore, who is still alive and well, Gallagher’s death seemed to doom the blues guitarist to rock ‘n’ roll obscurity.

Thanks to the folks at the brand new Buddha Records, however, Gallagher’s fate may not be quite so bad. An ambitious reissue and rediscovery program by the reformed label is placing Gallagher’s musical legacy back on the street, where it belongs. The label reissued Gallagher’s self-titled first solo album and Deuce, his second effort – both on CD for the first time domestically – about a month or so ago. Buddha seems to be buying up Gallagher’s work from other labels, as well, suggesting a champion somewhere in the corporate ranks, and rumor has it that we’ll be seeing reissues of Irish Tour ‘74 and the underrated Photo Finish on compact disc sometime soon.


Perhaps Buddha’s greatest coup, however, is the recently released BBC Sessions, a two-disc collection of live performances and radio broadcasts that serves as an excellent place for the uninitiated to become familiar with Gallagher’s talents. Following hot on the heels of BBC collections from Led Zeppelin and Jimi Hendrix and preceding an upcoming release from the Who, Gallagher is among heady company, as well he should be. British union rules required BBC radio to broadcast a certain amount of live music each day, which led to a number of different programs that featured live performances from local venues around London, as well as in-studio appearances from various popular performers. The BBC has hundreds of hours of this stuff, covering almost every British artist of note and more than a few American talents, as well. Realizing the treasure trove of recordings in their hands, the BBC has begun to cash in on their archives, much to the delight of music lovers everywhere.

The Irish-born Gallagher grew up listening to these BBC broadcasts, and made his first appearance on those airwaves in 1968. Gallagher’s first breakthrough came with Taste, a blues-oriented power trio much like Cream, and his work with that band caught the ears of European audiences. As a solo artist, Gallagher toured relentlessly, both across Europe and the United States. It was his BBC appearances, however, which helped support this touring, Gallagher’s scorching six string work reaching out across the airwaves and making converts out of listeners across the globe. Gallagher did a lot of work on the BBC – his brother’s liner notes to BBC Sessions says that they had to work their way through 10 hours of tapes to compile this set – and if the material here is representative, he never disappointed.


The BBC Sessions set is divided into two parts. The first disc is a collection of performances that were broadcast on a program called In Concert and were caught live in clubs like the Hippodrome, the Paris Theatre, and the Hammersmith Odeon. Most of these ten cuts are taken from 1977-79, a period that many consider to be Gallagher’s golden age. A lone cut from 1973, the traditional blues number “What In the World,” serves mostly as a foreshadowing of Gallagher’s still maturing talents. There are many great performances caught here, including the rollicking “Country Mile” and the fluid “Calling Card,” one of Gallagher’s signature tunes. “Got My Mojo Working” is an electric boogie while Gallagher’s original “Used To Be” showcases some red-hot playing beneath the artist’s growling vocals.

The second disc here is comprised of live studio broadcasts and, with the producers casting a wider net, features performances that range in age from 1971 to 1986, with an emphasis on the mid-‘70s era Gallagher. If the first disc shows Gallagher’s energy and skill in a live setting, the material performed in the studio on disc two showcases the deliberate and complex side of Gallagher’s talents. Again mixing scattered originals with inspired covers and custom arrangements of traditional blues numbers, these studio performances provide a more complete look at Gallagher’s evolution as a guitarist. A couple of more familiar tunes dominate the side – the haunting live staple “Daughter of the Everglades” and “Seventh Son of 7th Son,” which sounds as close to authentic Delta blues as any Irishman is every going to get, but there’s plenty of solid performances to choose from.


A mesmerizing guitarist and charismatic performer, Gallagher was capable of both great subtlety and outrageous bluster in his playing. A hard-working performer who toured to the point of exhaustion, Gallagher often cranked out studio albums – especially in his later years – that balanced mediocrity with brilliance, hiding a truly magical performance or two among the musical chaff. His better tunes usually made it into his live set, and it’s indeed his live albums, of which he made several, upon which his legacy is built.

Gallagher deserves more respect than he’s received. With twenty-five years under his belt, he literally died from too much living. He left behind a lot of great music, however, and thanks to Buddha we’ll get to hear some of it again. Gallagher had a talent every bit as great as Clapton, Page, or Stevie Ray and, as such, is quite worthy of rediscovering. (Buddha Records, released 1999)