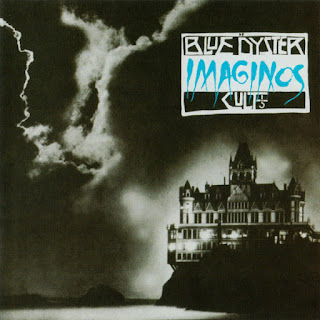 One of the most commercially successful and critically-acclaimed rock bands in American history, Blue Öyster Cult created the perfect fusion of ‘60s pop and ‘70s proto-metal that would have a profound influence on the evolution of both hard rock and heavy metal in the decades to follow. Intellectual, but reveling in their counter-culture roots, lyrically the band mixed elements of mythology, the occult and contemporary literature with science fiction and horror film trash culture in the creation of a new musical paradigm that celebrated high-and-lowbrow culture equally.

The earliest roots of the band lie in the relationship between two students at Stony Brook College on Long Island. As far back as 1967, Sandy Pearlman and future rock critic Richard Meltzer had plans to conquer the rock ‘n’ roll world. With Pearlman managing the band and both he and Meltzer writing lyrics, they put together a group that included the core of the future BÖC – guitarist Donald “Buck Dharma” Roeser, keyboardist Allen Lanier, and drummer Albert Bouchard – known as Soft White Underbelly.

Signed to Elektra Records, Soft White Underbelly recorded an unreleased album and subsequently changed the band’s name to Oaxaca before settling on being called the Stalk-Forrest Group. A second album recorded for the label was also buried in the vaults, although a single was later released under the Stalk-Forrest Group name. Dropped by the label and shuffling personnel, they changed their name once again to Blue Öyster Cult and signed with Columbia Records, which is where the BÖC story really begins.

The band’s self-titled album was released in 1972 and scraped the bottom of the charts. This must have been good enough to partially satisfy the label, as they were attempting to promote BÖC as their very own homegrown version of Black Sabbath. The debut album’s fortunes were helped by the media-savvy promotional efforts of Pearlman and Meltzer, as well as the creation of the band’s ubiquitous hook-and-cross logo, an important precursor to the imaginative logo designs of heavy metal bands in the decade to follow.

Tyranny & Mutation followed in 1973, and Secret Treaties in 1974, each album experienced higher sales numbers. The powerful live double-album, On Your Feet Or On Your Knees, was released in ‘75, but it would be the following year’s effort, Agents of Fortune, that would prove to be the band’s commercial breakthrough. Yielding a Top 40 single in “(Don’t Fear) The Reaper,” the album would be the first in a string of Gold™ and Platinum™-selling discs that culminated five years later with 1981’s Fire of Unknown Origin.

The band stumbled badly, however, both commercially and creatively, into the new decade. Original members had left the band, or been asked to leave, and weak studio albums like 1983’s The Revolution At Night and 1986’s Club Ninja alienated long-time fans. With only Dharma and Eric Bloom left from the band’s original line-up, BÖC continued to tour. Released in 1988, the band’s 14th album, Imaginos, would also be its last at the time.

Back at the dawn of the ‘80s, however, Imaginos was originally planned by former BÖC drummer Albert Bouchard to be a solo work, a concept album based on a song cycle created by Sandy Pearlman back during the late 1960s. Almost six years in the making, Imaginos includes instrumental contributions from several of Bouchard’s NYC friends, including bassist Kenny Aaronson and guitarists Joe Satriani, Aldo Nova, and Robbie Krieger of the Doors.

When Bouchard was nearing the finish line with Imaginos, he found out that the record label wasn’t exactly enamored of his efforts. They would only agree to release the album under the Blue Öyster Cult name, so the master tapes were sent to Pearlman and the band overdubbed vocals and instrumentation. Thus the incorrect appearance that BÖC had reformed with its original line-up, including Albert Bouchard…but it was all on paper, folks. Met with confusion by fans and critics alike, and under-promoted to death by the label, Imaginos was deemed an overall failure. BÖC was subsequently dropped from Columbia after an almost 20-year association with the label.

Long out-of-print, and the subject of no little discussion by Blue Öyster Cult fans through the years, thanks to the good folks at American Beat we have a reissued/remastered version of Imaginos to judge on its own merits. Musically, the album-opening “I Am the One You Warned Me Of” spanks-and-cranks with typical period metal overtones, with heavy riffing, clean ringing guitars and Bloom vocals that sound eerily like Secret Treaties-era BÖC. Slower-paced than the band’s early ‘70s brain-bashers, the song is no less menacing. “Les Invisibles” is more contradictory, featuring some delectable, deliberate skull-bashing fretwork and rhythms…but the constant refrain of “seven, seven, seven” is more irritating than an itchy straitjacket, and as unnecessary to the grand design of life as ticks and garden slugs.

“In the Presence of Another World” is a vintage BÖC face-burner, opening with elegant six-string plundering before kicking into some sort of sci-fi soundscape with soaring vocal harmonies and crunchy riffage courtesy of Mr. Dharma. “Del Rio’s Song” offers up some fine lead vocals but little in the way of substance; lacking distinctive instrumentation (or else it’s buried too deep in the mix), it’s a pleasant diversion and nothing more. “The Siege and Investiture of Baron von Frankenstein’s Castle At Weisseria” is as epic and long-winded as the song’s title. Sounding like an outtake from a Ronnie James Dio album, the song showcases Joe Satriani’s scorching six-string leads. The song kind of grows on you, as blustery as it is, and it’s an excellent example of early prog-metal overkill. 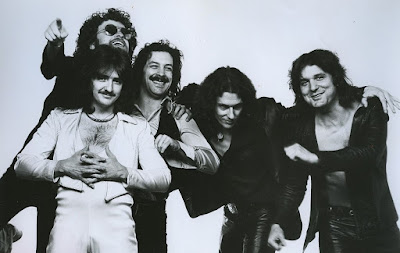 “Astronomy” should be familiar to any BÖC fan; originally included on Secret Treaties, the song sits perfectly at the intersection of the band’s science-fiction fantasies and fantastic metal proclivities. “Magna of Illusion” has delusions of grandeur, but it also includes some nifty Robbie Krieger guitar noodling, so I’ll begrudgingly swallow the song’s hackneyed lyrical aspirations. “Blue Öyster Cult,” the song, bites down hard; a re-working of the original tune “Subhuman” from Secret Treaties, which was derived from “Blue Öyster Cult” to begin with (calling M.C. Escher), this is one limp biscuit nonetheless.

I’ll call the title track a draw – although it could have sorely benefited from some big-lunged Eric Bloom vocal expertise, it kicks in with some tasty licks and keyboard riffs that rescue it from oblivion. Bloom is absent without leave from much of Imaginos, leaving the bulk of the vocal weightlifting to the capable Buck Dharma. When any of the guest vocalists kick in on a song, it’s either cringeworthy, or as slight as to be as easily forgotten as last week’s hangover.

As stated before, Imaginos is a conceptual song-cycle, something about a big-haired meanie that travels through time to stomp on our hopes and dreams, or some other late ‘60s lysergic-fueled narrative. Much like early Voivod albums, you have no idea what the hell they’re talking about – you just sit back and try to enjoy the ride. By the Reverend’s count, you have five bona fide BÖC gems on Imaginos, three whiffballs, and one plea of “nolo contendre.” That’s close enough for rock ‘n’ roll in my book, and certainly a better batting average than many of today’s pud-pounding corporate rockers.

So, just where does Imaginos fall in the BÖC canon? With the benefit of 20 years of hindsight, I’d say that it’s certainly better than either of the band’s two previous ‘80s-era albums, and it’s perhaps the band’s most overtly metallicized effort, ever. In spite of all the cooks here adding their own ingredients to the gumbo, some of that tasty BÖC flavor rises to the top regardless. While Imaginos won’t prompt any fans to pawn their copies of Agents of Fortune or Fires of Unknown Origin (or the classic first three BÖC ear-mashers, either), you won’t embarrass yourself by owning a copy, either. (Columbia Records, released July 1988)

Review originally published by the Trademark of Quality (TMQ) blog…