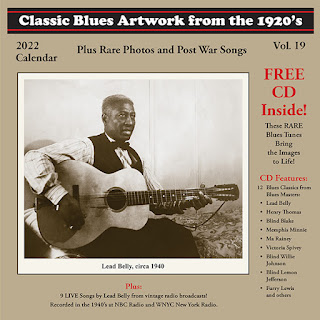 The Reverend has certainly sung the praises of John Tefteller’s annual Blues Images calendar before (like in 2019 and 2020!). The annual datebook has adorned my office wall for well over a decade running, and I welcome with my usual glee the autumnal arrival of that 12”x12” box with the next year’s calendar. Well, gentle reader, I’m here to tell you that the 2022 calendar is now available and it’s a winner all around!

For those of you who haven’t gotten hip to this annual gift from Mr. Tefteller, the Blues Images calendar features vintage advertising artwork from the long-gone Paramount Records blues label, materials that noted record collector and dealer Tefteller literally rescued from a dumpster over 20 years ago. Each year’s calendar preserves an immensely-valuable visual history of the early years of the blues; I donate my slightly-used copies at the end of each year to the Bill Schurk Sound Archives at Bowling Green State University in Ohio. Whereas last year’s calendar featured more photographic advertising art than the traditional pen-and-ink drawings of the past, the 2022 features an interesting balance of hand-drawn ads with little photographic inserts.

As I wrote about last year’s calendar, printing technology had improved over the years, allowing for more photographic representation, and 2022 features advertising promoting Paramount releases of plastic fantastic sides like Henry Thomas’s “John Henry,” Memphis blues legend Furry Lewis’s “Jellyroll,”  Memphis Minnie’s “You Can’t Give It Away,” and Bessie Smith’s “Homeless Blues” along with ads for 78-rpm flapjacks by folks both well-known and obscure like Blind Willie Johnson, Kansas City Jim Jackson, and Blind Blake, among others. Each calendar page is annotated with historical and biographical information about the featured artist, and each month also includes the birth and death dates of classic blues artists. 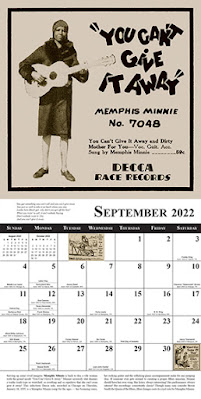 The Blues Images 2022 calendar cost slightly more than some cheap wall-hanger you’d buy from the mall or local bookstore, but for the hardcore blues fan, Tefteller packs a lot of value for the $26.95 (plus shipping) it will cost you. Each Blues Images calendar includes a full-length CD that features rare, impossible-to-find, and often one-of-a-kind tracks, many of them sourced from Tefteller’s extensive personal collection. The performances, which include the songs from the original advertising in the calendar as well as related releases, have been remastered from the original 78rpm records using the ‘American Epic’ digital process that makes the sound on these antique shellac marvels really pop out of your speakers.

Much like last year, Tefteller has expanded the scope of the calendar’s accompanying CD to include old-school blues tracks dating from the late 1920s through the mid-‘30s and featuring songs from the aforementioned legends along with Ma Rainey’s “Little Low Mama Blues,” Blind Willie Johnson’s haunting read of “John the Revelator,” Victoria Spivey’s “The Alligator Pond Went Dry,” Washboard Walter’s “Wuffin’ Blues,” and Papa Charlie Jackson’s “Hot Papa Blues No. 2” as well as tracks by Blind Lemon Jefferson, Black Byrd, and the Famous Blue Jay Singers of Birmingham. A real treat this year is Tefteller’s amazing find of nine songs by folk-blues legend Lead Belly, recorded live during a 1949 radio broadcast by WNYC in New York City.

The Blues Images 2022 calendar kicks off with a spry 1934 recording by Mr. Ledbetter, but the 1949 radio performances are a revelation. Lead Belly delivers some of his usual blend of acoustic folk, blues, and gospel music in tunes like “Swing Low, Sweet Chariot,” “Good Morning Blues,” and “The Boll Weevil” but it’s some of the less-well-worn songs that sound the sweetest here. Lead Belly’s wavering vocals and innate charisma shine brightly on performances like the traditional prison work song “Take This Hammer,” the obscure blues tune “Ain’t Gonna Let You Worry My Life No More,” or the mesmerizing chain-gang call-and-response of “Stewball” (itself derived from a British folk song). Ledbetter is allowed time for introductions and explanations between songs, making for a phenomenal set by a bona fide American music legend.

The annual Blues Images calendar and CD is a “must have” addition to the collection of any serious old-school blues fan. Blues Images sells other cool blues-related stuff, too, like posters, t-shirts, CDs from previous years, and past years’ calendars. You can find it all on the Blues Images website. Tell John that “the Rev sent ya!”
Posted by Rev. Keith A. Gordon at Friday, October 01, 2021