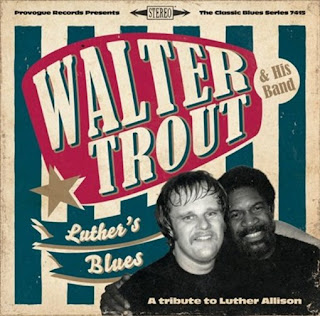 If you stop to think about it, Walter Trout is the perfect candidate to record a tribute album to the late blues guitarist Luther Allison. As a friend, mentor, and musical influence, Allison obviously had a profound effect on Trout. Both men are incredibly talented guitarists and, much like Allison, Trout pours it all out on stage every night, leaving his audience as wrung out and satisfied as Allison famously did.

Even the best of intentions can fall short, however, but I’m happy to report that Trout’s tribute to his friend – Luther’s Blues – rocks like a proverbial hurricane. Working with producer Eric Corne, who helped Trout shape his acclaimed 2012 album Blues For the Modern Daze, the guitarist unleashes decades of pent-up blues mojo on eleven tracks written, or made famous by Allison, as well as an inspired, brand new original. The results are breathtaking, with Trout investing the same sort of blood, sweat, and tears to the re-creation of these songs as Allison did when first recording them.

Allison’s “Cherry Red Wine” is, perhaps, the guitarist’s best-known song and, in Trout’s hands, it’s a burning mess of emotion that underlines its crying vocals with devastating fretwork that takes the heartbreak from pity to anger to sorrow in an amazing four minutes plus. Allison’s “Big City” is a potent, muscular rocker with scorched earth guitar licks while “Freedom” showcases Trout’s often underrated vocals with a stunning performance that does justice to the song’s socially-conscious lyrics. Trout cuts loose on his original “When Luther Played The Blues,” tearing up the strings with an inspired reading that is both reverent and a showcase of the lessons learned from watching Allison perform.

Walter Trout has built a career that he can be proud of but, with Luther’s Blues, he has delivered a powerful tribute to a great, but frequently overlooked talent. If Trout’s efforts get just one young blues fan to pick up a copy of Allison’s Bad News Is Coming or Soul Fixin’ Man, then he can consider his mission accomplished. (Provogue Records, released April 13th, 2013)