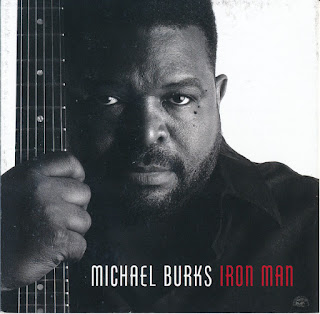 He was a nominee for "Best New Artist" in The Blues Foundation’s 2000 W.C. Handy Awards but the truth is, Michael Burks already had a lifetime of blues under his belt when considered for that award. A relative newcomer to the form, Burks recorded his self-produced, critically-acclaimed debut in 1997, and released Make It Rain, his Alligator Records debut, in 2001.

Burks was born into the blues, his father playing alongside Sonny Boy Williamson, and his grandfather was a Delta-style bluesman from Arkansas. Burks began playing guitar while still in the single-digits, age wise, and began performing shortly thereafter. He grew up in his father's blues club, and although he's worked a day job most of his life, Burks has always found time to pull out his guitar and set it on fire on any available stage. In fact, Burks has earned the nickname "Iron Man" for his dynamic, electrifying, marathon live performances.

As such, one has to approach Burks' anticipated third Alligator Records release, Iron Man, as if you're watching the axeman performing live on stage…I suspect that Burks approaches the recording process with much the same passion and commitment that he brings to his stagework. Iron Man certainly jumps the gun right from the starting line, rising with the blisteringly heavy "Love Disease," Burks' rabid wolverine of a guitar ripping and tearing off bloody riffs and surgical solos with maddening fury. It's a sure sign that Iron Man is no run-o-the-mill blues workout, but rather a menacing, towering, white-hot rollercoaster of houserockin' blues…old-school, ice-cold Albert Collins style.

The pace slows only slightly with "Strange Feeling," to a deliberate dino-stomp of self-assured rhythms and Burks' throaty, soulful vocals. If anything, the man's solos here are even more reckless and rocking than on the album-opener, Burks opening up a can o' kick-ass and proceeding to flog the listener's ears with shredded guitar strings and his magnificent guitar tone. A more refined, dignified affair, "Empty Promises" brings Iron Man onto a more traditional blues turf, Burks' stormy lyrics matched with a moody, atmospheric, and cloudy soundtrack. The keyboards are mixed to the forefront here, playing well off of Burks' tasteful, nuanced fretwork.

Ripping Through The Blues

"Quiet Little Town" is anything but, Burks and gang shedding the rarified modesty of the previous song to crank out a chainsaw roadhouse rocker, with buzzing guitar riffs, honky-tonk piano-bashing, and rock-em-sock-em rhythms that drive the song right off the stage, through the door, and out into the street to catch its breath. "Hard Come, Easy Go" is a soulful blues-rocker with mournful vocals and Burks' taut fretwork while "Ice Pick Through My Heart" is a classic example of "woman done me wrong" blues music, complete with tearjerker fretwork and dusky, foreboding keyboards.

A spot-on cover of Free's "Fire And Water," with plenty o' Kossoff-inspired guitar pyrotechnics and Burks' deep, throaty vocals, is certain to grab the blues-rock fan by the ears and shake loose some spare change. The album-ending "Changed Man" is another raucous roadhouse number, stinging six-string slicing through the thick instrumentation, a steady rocking beat tipping the stage from one end to the other. After the song hits its chaotic crescendo, it ramps down the rpm and exits stage right. It's a surefire way to keep Burks' face-pasting fretwork ringing in your ears for days after hearing it blast out of your speakers.

Iron Man is undoubtedly an album directed at those listeners that love them some guitar-driven electric-blues. To this end, almost every song here features some variation of Burks' roughneck guitar-slinging. What Iron Man also does, however, is showcase Burks' growing talents as a singer and songwriter, the artist penning several near-classic tunes here that I could easily see being swiped, er…covered by some blues-rock band sometime in the future.

More to the point, though, Burks' six-string skills continue to evolve and expand, the talented fretburner just as capable of bringing a subtle, elegant flourish to a song as he is in tearing off a lightning-quick solo. Iron Man is a blues guitar fan's kind of album – red hot and ready to rock! (Alligator Records, released February 20th, 2008)