Bootleg Review: Rage Against The Machine’s Who’s On First? (1995) 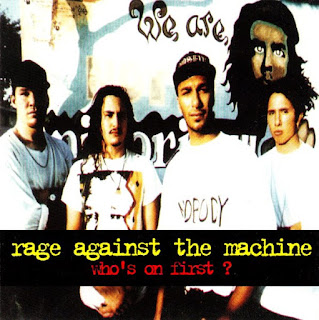 A current fave among tape traders and bootleggers, there are a number of Rage Against The Machine performances circulating among the collecting community. One of the better collections, taken from the band’s 1993 U.S. tour is Who’s On First?, released by the Hawk Records label in Italy. The songs compiled on Who’s On First? represent some of the band’s better performances, versions of “Bombtrack,” “Bullet In the Head,” and “Killing In the Name” offering extremely energetic musical and vocal gymnastics.

Zach de la Rocha’s spoken rendition of Alan Ginsburg’s “How To Be Played On A Jukebox” is particularly potent, tying together the F.B.I., the C.I.A., and the Mafia in the world drug trade, fighting against democracy in Viet Nam and elsewhere under the aegis of multinational corporate capitalism. Underscored by darkly threatening instrumentation, it is a fiercely venomous rendering of the song.

Altogether, Who’s On First? runs nearly 50-minutes in length, offering a fine set of Rage Against The Machine’s most popular songs. With the band’s recently-released Evil Empire tracking quite well on the charts, a summer tour and guest appearance at Lollapalooza, Rage Against The Machine will continue to increase its fan base with a monstrous live persona. Until the inevitable live recordings from their upcoming 1996 tour start to appear, I’d heartily recommend Who’s On First? to the band’s rabid fans. Grade: B