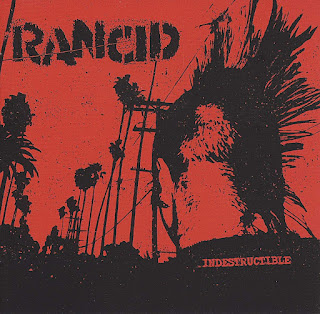 There are punk bands, and then there is Rancid. Legendary among its peers, Rancid stands as both the de facto standard for the punk rock aesthetic and as a mirror used by other bands to measure their own commitment to the music. If Rancid’s last couple of albums played mostly to the band’s hardcore faithful, Indestructible is a return to the substance, if not exactly the style of the band’s semi-commercial breakthrough, …And Out Come the Wolves. The band has grown immensely through the past few years, its members dabbling in outside musical projects and suffering personal tragedies that would cripple lesser artists, the band members coming out on the other side of the veil of tears stronger and more dedicated to their craft than ever before.


On the surface, Rancid frontman Tim Armstrong’s betrayal by and divorce from his wife Brody of the Distillers informs Indestructible. The album is littered with little digs at Armstrong’s wandering ex, from “I’m ashamed now to say I even knew you” in the title cut to “Don’t worry about me, I’m gonna make it alright” in “Fall Back Down” to a half-dozen other thinly veiled references. But Indestructible is about much more than a failing marriage. The album uses the frailty of human relationships as a framework to discuss traditional male traits of loyalty, friendship and brotherhood and how staying true to these concepts pays off in the end. It’s pretty heady stuff for a “mere” punk band, but Armstrong has always been an intelligent, self-aware critic and a voice for the (mostly) working class punk community.

Although the Conservative right usually claims honor and loyalty as its exclusive domain, you’ll find more brotherhood among members of your average street gang than in any country club in America. With Indestructible, Armstrong and crew further the concept of punk band as street gang and, indeed, there’s little difference between the two. Both the street gang and the punk band are made up of aggressive young males, one usually defined by geography and the other by music. Their common experiences, whether a shared poverty or twelve hours a day driving down the highway in a van together, creates a bond that is difficult for outsiders to understand. Both groups provide extended families for its members, create their own language and iconography while a strong code of honor (or high artistic standards) provide a needed foundation.

But where does all of this sociological mumbo-jumbo leave Indestructible? Well, the album rocks with a fervor that few bands can manage, the chemistry of a decade spent together having forged a band that can turn on a dime, capable of expressing any musical idea that its members choose to push. There are precious few ska rhythms here, and fewer overt musical references to the Clash. Bassist Matt Freeman and drummer Brett Reed are arguably the best rhythm section in punk rock and guitarist Lars Frederiksen continues to grow as a player, elements of roots rock and bluesy flourishes creeping in at the edges of his blustery six-string assault. Armstrong is a wonderfully flawed vocalist, his warm drawl stretching out syllables and slurring words with an accessible patois of city slang and hip-hop inflection.


Lyrically, the album’s title cut champions the healing power of rock ‘n’ roll and, name-checking Joe Strummer, lets slip the truth that as long as people listen to the music, the musicians who created it will never die in our hearts and in our memories. “Fall Back Down” champions the band as family, a self-contained brotherhood of equals that carry one another through heartache and tragedy. “Start Right Now” refers to the actions of our leaders, “a shill in a mask and a puppeteer,” and the effects these actions have on the average man while “Out of Control” describes the propaganda and lies that led us into the war in Iraq. 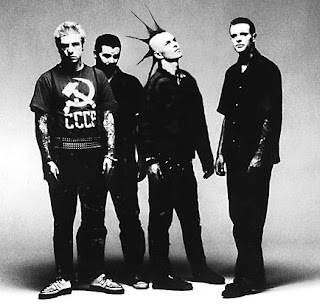 With “Django,” Armstrong uses a ‘60s-vintage spaghetti western as a metaphor for the emotional and physical baggage that people carry around with them. In the film, the lead character Django was your typical Eastwood-styled strong, silent type, dragging a coffin that contained a multi-shot Gatling gun across the old west from town to town. Many people do the same, carrying around their own “coffin” in the form of drug or alcohol addition or emotional and physical abuse. “Travis Bickle” uses another film reference, to Scorsese’s brilliant Taxi Driver, to describe the hopelessness and despair that exists on the streets of every city, no matter where you go while “Memphis” is a lively tale of life on the road.

“Tropical London” tackles the breakup of Tim and Brody directly, Armstrong sharing memories of his wife as honestly and with as little bitterness as possible. Similar to Tom Petty’s “You Got Lucky,” the singer tries to turn the tables on the one who left, declaring “if you lose me, you lose a good thing,” tho’ the phrase rings hollow and in the end, the broken heart remains. “Stand Your Ground” is a heartfelt treatment of homelessness in America, a dirty little secret often ignored in the face of shallow flag waving and national saber-rattling. Indestructible closes with “Otherside,” written for guitarist Lars Frederiksen’s brother Robert, who died in 2001. It is at once both a tribute to a loyal fan of the band and a celebration of his life and of the music he loved. It is a potent closer and a hell of a rocker.


With Indestructible, Rancid has upped the ante and delivered another career-defining album. Through various levels of success, the inner turmoil of the band member’s personal lives and suffering the rigors of the road, Rancid has managed to stay strong, stay independent and stay focused on creating great rock ‘n’ roll music. They have done so without compromise, creating a legacy that will live on long after the band ceases to exist. (Hellcat Records, released 2003)