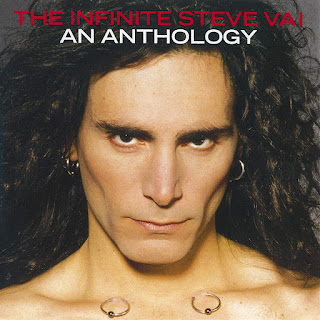 A long overdue anthology of superstar guitarist Steve Vai’s work for Epic Records, The Infinite Steve Vai is a steal of a deal for the uninitiated and/or curious, offering 32 tracks spread across two CDs at a lowball price of around $20 at most retailers. Although Vai’s legion of loyal fans will find little that is new here, the set does gather some odd strays from Vai’s musical canon, such as “Christmas Time Is Here” from a 1997 holiday collection or “The Reaper” from the 1991 movie soundtrack of Bill & Ted’s Bogus Journey. “Feathers,” an instrumental recorded as a demonstration for Tone Works’ Pandora PXR4 portable digital recorder, was simultaneously released on Vai’s 2003 rarities collection Mystery Tracks Archives, Volume 3 on his own Favored Nations label.

To their credit, the producers have included a song from Vai’s one-album stint with Whitesnake, “Kittens Got Claws,” and a track from the guitarist’s mid-‘80s Alcatrazz recording, “Light Shade Of Green.” However, this career retrospective overlooks vital material from Vai’s lengthy tour-of-duty with Frank Zappa’s band or his work backing up David Lee Roth that made Vai a guitar hero during the mid-80s. Also ignored are odds-and-ends that could have rounded out a third disc for the set, session work with varied artists like Alice Cooper, Billy Sheehan and Public Image Ltd.

These minor cavils aside, The Infinite Steve Vai does collect some fine work, showcasing the acclaimed guitarist’s amazing abilities as well as his penchant for improvisation and experimentation. Few axemen possess the skills to blend hard rock, heavy metal, jazz, and avant-garde guitar licks as effortlessly as Steve Vai. If you’re a newcomer to Vai’s talents, look no further than The Infinite Steve Vai as a satisfactory, if incomplete primer of the artist’s considerable musical history. The collection’s reasonable price and limited scope will provide a stepping stone to more ambitious and complete collections of the six-string wizard’s work. (Legacy Recordings, released 2003)