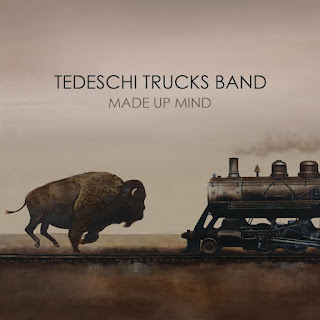 The Tedeschi Trucks Band grew out of the 2010 summer tour dubbed “Soul Stew Revival,” which itself was planned as a way for the real life married duo of singer/guitarist Susan Tedeschi and guitarist Derek Truck to spend some time together on the road with their family as opposed to launching solo tours. The Soul Stew Revival included members of each artist’s band as well as talented friends and, as time passed, it grew into the eleven-piece ensemble that makes up the Tedeschi Trucks Band. Revelator, the band’s 2011 debut album, dominated the blues chart for a couple of years with its inspired mix of blues, soul, gospel, and rock ‘n’ roll while Everybody’s Talkin’, a two-disc 2012 live set, picked up the slack on the charts when Revelator’s sales began to flag.

Now it’s 2013 and the Tedeschi Trucks Band returns after two years on the road with its second studio effort, Made Up Mind. While a lot has been made of the similarity of Tedeschi’s vocals to those of the great Bonnie Raitt, Made Up Mind brings another comparison to my mind, to the underrated Bonnie Bramlett and her late 1960s/early 1970s collaborations with her late husband Delaney. Much like Bramlett, Tedeschi wrings every bit of juice out of a lyric, and what is the Tedeschi Trucks Band but a modern-day conglomeration of talent like Delaney & Bonnie & Friends, with Trucks playing the role of both Delaney Bramlett and Eric Clapton?

Tedeschi Trucks Band’s Made Up Mind


Made Up Mind opens with the title track, Trucks’ chunky guitar scrape accompanied by a funky, choogling groove and full, rich backing instrumentation. Tedeschi’s lovely voice kicks in, displaying her Etta James influences, the singer rolling with the groove and soaring above the fray when necessary only to trail off in favor of Trucks’ fluid, sizzling guitar solo. This is the kind of ready-made, radio-friendly jam that would have dominated the AOR airwaves in the early-to-mid-1990s but today it plays to a mainstream blues audience ill served by corporate radio.

“Do I Look Worried” takes the band back to an even earlier era, Tedeschi’s stunning torch-song styled performance creating a 1950s R&B vibe, as seen through a 1970s blues-rock lens, the sound reinforced by the band’s subtle, elegant use of horns in the background. The song’s lush instrumentation threatens to overwhelm the singer, Tedeschi nevertheless rising to the occasion, assisted by Trucks’ gorgeous guitar lines and stinging solos. “Idle Wind” is a pure 1970s construct, the sort of bluesy, folkie, acoustic rock hymn that many of us cut our eye teeth on back in the day, the song darkly imaginative, with a lovely use of Kofi Burbridge’s feathery flute runs and a soft layer of horns.


Calling Out To You 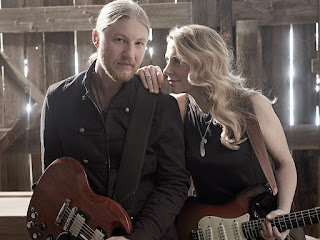 The throwback soul of “Part of Me” is delivered pitch perfect by the fine vocal interplay between Tedeschi and trombonist Saunders Sermons, who sounds like a young Curtis Mayfield. The 1960s soul ambiance is undeniable and, just in case you may not have caught the song’s reference point, Trucks kicks out his best Steve Cropper/James Burton guitar licks, spicing up an already enchanting performance. Tedeschi’s vocals on “It’s So Heavy” further underline the Bonnie Bramlett connection, the singer evoking no little emotion in an otherwise deceptively understated performance; Trucks’ accompanying solos are also appropriately muted, albeit with the strength of a rushing river.

Hands down, the most raucous tune on Made Up Mind, “The Storm” amps up Trucks’ rattletrap guitar riffs while the rhythm section cranks out a ramshackle juke-joint groove straight out of the Junior Kimbrough/R.L. Burnside playbook. There’s more at play here than a Mississippi Hill Country influence, however, Tedeschi throwing a little Memphis soul into her vocals while Trucks tosses off a golden jazz-flecked solo that invokes Luther Johnson as much as Luther Dickinson while Burbridge’s gospel-tinged keyboards ride shotgun before chaos descends at around the five-minute mark as Derek clearly loses his mind (speaking instrumentally, of course) and tears off a deadly swamp-blues solo mixing Duane Allman’s greasy tones with John Campbell’s Delta dirt. Providing a stark contrast, the album closes with the acoustic “Calling Out To You,” a fine showcase not only for Tedeschi’s vocal skills but also for Trucks’ six-string dexterity as the two record sans band for a charming and entirely intimate performance.


The album’s songwriting is, admittedly, the weakest part of Made Up Mind, too many of the album’s tunes composed by committee and lacking a lyrical cohesion (several songs co-written by the Jayhawks’ Gary Louris). The best material seems to be that which echoes a singular voice, the title track, “Do I Look Worried,” and “Misunderstood” particularly standing out from the crowd. Whereas the size of the band may have created an obstacle in the instrumental composition of the material, the talents involved and the chemistry created by a couple years on the road has created an entertaining and musically exciting blend of blues, soul, and rock ‘n’ roll.

The Tedeschi Trucks Band has been accused of recording an album that is more “pop” than blues with Made Up Mind, and there’s no denying the mainstream appeal of these bright, shiny performances. It’s the band’s love of the music, however, that makes Made Up Mind a winner. This may not be your daddy’s blues, but this is a big tent that we’re all under, with plenty of room for newcomers, and Tedeschi Trucks Band is redefining rhythm and blues with a sound entirely its own... (Sony Masterworks, released August 20, 2013)

Buy the CD at Amazon: Tedeschi Trucks Band’s Made Up Mind