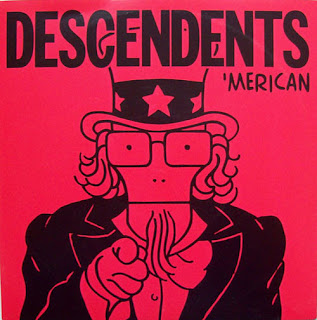 It’s been nearly a quarter-century since the Descendents put SoCal punk rock on the musical map, the band defining the “pop-punk” sound as a mix of melodic pop/rock and three-chord hardcore punk with a jolt of humor thrown in to smooth out the sound. Although they never reach the pinnacle of popularity enjoyed by lesser carbon copy bands like Blink-182 or Good Charlotte, the Descendents have retained a fond spot in our hearts for the band’s uncompromising music, self-defacing humor and immense influence. I can’t imagine bands like the Offspring, Green Day or NoFX existing without first listening to the Descendents.


In anticipation of the first honest-to-god Descendents’ album in almost eight years, the band has released a four-song EP to provide long-time fans with the sound of the band circa 2004. With two songs previewing the upcoming Cool To Be You, and a couple of non-LP tracks, the ‘Merican EP stands well on its own. “Nothing With You,” from the new album, is a nifty slice of guitar-driven power-punk that explores the familiar comfort of sitting around and doing nothing with the one you love. Watching TV and joyfully proclaiming “I’m not lazy, I’m in love,” the tune name checks pop culture touchstones like The Simpsons and Seinfeld while delivering domestic bliss with a riff-happy soundtrack. The bittersweet “Here With Me,” exclusive to the EP, shows the other side of the coin, the forlorn vocals evincing melancholy for a love lost while strong, deliberate fretwork is embroidered on top of a steady beat.

Another non-LP cut, “I Quit,” is a scorched-earth dismissal of those who would criticize the band as “sell outs” or, worse yet, “not punk enough,” the venomous lyrics empowering the musicians to make their own choice of the music they play and the lives they lead. Stephen Egerton’s six-string work is stunning, roaring over the edge into metallic overdrive as Bill Stevenson’s explosive drumbeats and Karl Alvarez’s massive bass line support Milo’s clever lyrics: “What'd ya think, I wanted to be Mick Jagger or something/Playing the pixie at 50 or 60?/Gimme a break!/I mean, I don't wanna grow up and all that, but/The time has come for me to say – I quit!” An untitled “hidden” song, drifting in after the end of “I Quit,” seems like nothing more than the fab four having a bit of fun after the previous song’s statement, sounding all the world like Metallica or some other metal-edged arena rockers. Showcasing the band’s collective talents and extending its sound beyond the confines of the punk genre, the tune is a real eye-opener to this outfit’s chemistry and musical potential.

It’s with the title cut of this long-overdue EP that the Descendents, much like labelmates NoFX recently did, take a 180-degree turn. Sure, Milo and his mates have always been cynical, angry young punks, but I don’t remember the band ever making as powerful a political statement as it does with “’Merican.” A jaded observation of American history delivered with machine-gun vocals and staggering three-chord prowess, the song begins with “We flipped our finger to the king of England/Then stole our country from the Indians/With god on our side and guns in our hand/We took it for our own.” Milo continues to spit out rapid-fire lyrics with an equal measure of pride and horror as he outlines the good, the bad and the ugly of America. Every verse is punctuated with the chorus “Listen up man, I’ll tell you who I am/I’m just another stupid American/But you don’t want to listen, you don’t want to understand/Just finish up your drink and go home.”


Much like NoFX’s wonderfully wry “Franco American,” the Descendents deliver a potent commentary on society without the cliched rhetoric that plagues many political-punks, the band punching its thoughts home with maximum amplification in a mere minute and fifty-one seconds. Another preview from Cool To Be You, the Descendents leave the listener eagerly awaiting the band’s first album in almost eight years. Something tells me that it will have been worth the wait… (Fat Wreck Chords, released 2004)