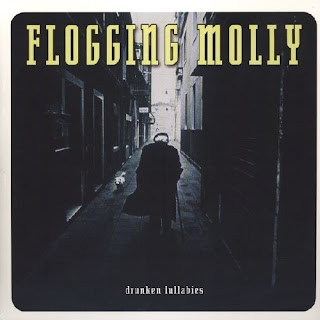 A few seconds into the boisterous title track of Flogging Molly’s sophomore album, Drunken Lullabies, the Celtic blood began burning in my veins, my Doc Martens began pounding the floorboards of our aging farmhouse and I had a powerful thirst for a cold, frothy ale. The latest in a line of fine Irish musical delinquents that began, perhaps, with the Pogues and runs through current punk-rock icons such as the Swingin’ Utters and the Dropkick Murphys, Flogging Molly deliver the goods with an energy and élan unmatched by its contemporaries. Bristling with attitude and flexing its musical muscle with raucous vocals and brawling instrumentation, Drunken Lullabies is a quick cure for the corporate rock blues.


Molly vocalist/guitarist Dave King earned his bones with hard-rockers Fastway, tho’ the Dublin native seems more at home with his current crew of blustery, multi-instrumental bandmates. Diving headfirst into the same lyrical ground first broken by the Pogues’ Shane MacGowan, King explores themes of love and betrayal, sin and salvation, damning society while raising a mug o’ Guinness. The rest of Flogging Molly follows behind, blanketing King’s poetic tales of booze and brotherhood with a seamless wash of guitars, fiddles, mandolin and various pipes and whistles. The resulting chaos is exhilarating, energetic music that cranks up the amperage with the opening song and runs wild through tasty tracks like “Another Bag of Bricks,” “What’s Left of the Flag,” and the unrelenting “Rebels of the Sacred Heart.”

With their second album, Flogging Molly picks up the torch discarded by the Pogues better than half a decade ago, breathing new life into the Irish-punk genre and raising the bar for all the drunken Celtic rowdies that might follow their lead. If all the music you listen to is on commercial (i.e. corporate) radio, you might think that rock ‘n’ roll is in the doldrums. A single spin of Drunken Lullabies will convince you otherwise... (Side One Dummy Records, released 2001)