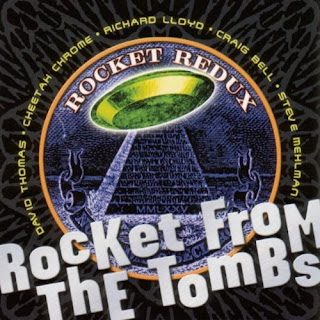 The near-mythical art-punk forebears of both Pere Ubu and the Dead Boys, Rocket From the Tombs is one of the great lost bands of rock ‘n’ roll. Fronted by pre-Pere David Thomas, a giant of a man with a fractured voice who went by the name of Crocus Behemoth, RFTT was a fixture on the mid-‘70s Cleveland rock scene. Influenced by bands like the Stooges, Velvet Underground and Kiss, RFTT experienced an ever-changing line-up of musicians with Thomas as the only constant. It wasn’t until Thomas hooked up with songwriter/guitarist Peter Laughner that the band settled down with a roster that included guitarist Gene O’Connor (a/k/a Cheetah Chrome), bassist Craig Bell, and drummer Johnny “Blitz” Madansky.

Rocket From the Tombs’ Rocket Redux


It is this RFTT line-up that is considered by Cle-punk aficionados as best representing the inspired mix of hard rock, heavy metal and art-rock that would become Rocket From the Tombs’ legacy. The band would release several singles during its brief lifespan, circa 1974-75, songs like “Sonic Reducer,” “30 Seconds Over Tokyo” and “Final Solution” that would later be revisited in classic versions by Pere Ubu and the Dead Boys. Creative tensions would eventually break the band into rival factions, with Thomas and Laughner forming Pere Ubu and O’Connor and Madansky forming the Dead Boys with Stiv Bators. RFTT never recorded a full-length album during it’s brightly-burning existence, the band’s disparate demo tapes and live recordings traded feverishly by hardcore fans for two and a half decades until they were collected on CD in 2002 with The Day the Earth Met Rocket From the Tombs.

Laughner would leave Pere Ubu shortly after its formation, starting and discarding a number of bands while he was writing about music for Creem magazine. The talented songwriter would die of liver failure in 1977 at the young age of 25, but his creative progeny would forge careers of various lengths. The Dead Boys lived fast and died young after a few years and a couple of albums while Thomas and Pere Ubu would soldier on into the new millennium. The RFTT myth kept growing through the years, however, and during the summer of 2003 surviving band members Thomas, O’Connor, and Bell got together for a brief tour under the Rocket From the Tombs name. Television’s Richard Lloyd filled the Laughner position and Pere Ubu’s Steve Mehlman sat in on the drums. The response was encouraging and performing the old songs was fun so much like the Rubber City Rebels recently did, the five RFTT members ventured into the studio.


Rocket Redux is the result of the reformed band’s studio sojourn. Produced by Lloyd in his NYC studio, the album is the collection of songs that RFTT never got the chance to record in 1975. Not surprisingly, the tunes still sound great after almost 30 years. All the members of RFTT’s current line-up have worked as musicians since the ‘70s so there is a fair degree of professionalism in the performance of these familiar songs. These guys are also some of the most hallowed names of the punk and post-punk eras, so the songs show a fair degree of off-kilter enthusiasm and reckless energy as well. Lloyd’s production on Rocket Redux offers a nice balance of melodic grunge and outsider art, red-hot twin guitars leaving scorched earth beneath Thomas’ vocal caterwauling.

If the songs on Rocket Redux are familiar, the arrangements and performances are not…this is how these songs were meant to be heard, and the band takes them back from history by adding its own brand to the titles. “Sonic Reducer RFTT” strips this gem of Stiv’s Iggy mannerisms and brings the song back to its minimalist art-punk roots with flailing vox by Thomas and stunning six-string work by O’Connor/Chrome and Lloyd. Pere Ubu’s rendition of “Final Solution RFTT” was never as eerie as this, Bell’s throbbing bass and Mehlman’s tribal drumwork giving way to Gothic vocals and screaming guitar riffs. It is some of the lesser-known works of the RFTT canon that benefit most from this reclamation project, tho’, Laughner’s tragic “Amphetamine” for instance is provided a reverent reading with delicate chiming guitarwork and somber vocals by O’Connor (or is it Lloyd?). New life is breathed into Laughner’s “Ain’t It Fun,” this “screwed and chopped” version bolstered by intricate guitar interplay and the hauntingly prescient line “ain’t it fun when you know that you’re gonna die young?” Stellar performances of “Down In Flames,” “Frustration” and “Life Stinks” show that RFTT has transcended time in its pursuit of rock ‘n’ roll’s Holy Grail.


Five, or maybe ten years ahead of its time, Rocket From the Tombs was fated to become one of those dusty footnotes to rock ‘n’ roll history, the band’s importance appreciated by critics and a few fans. To paraphrase Frank Zappa, however, “the modern day punk refuses to die,” the reformed Rocket From the Tombs adding another chapter to the band’s growing legacy with Rocket Redux. Whether you’re an old school fan or a young punkster learning about the genre from reissue CD, you owe it to yourself to discover/rediscover the myth that is Rocket From the Tombs. (Smog Veil Records, released February 24th, 2004)