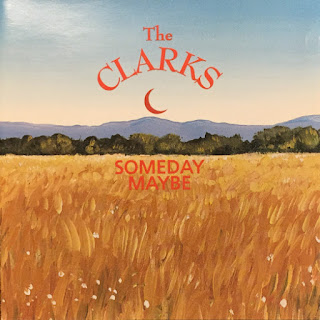 Back in 1997, the Reverend contributed some album reviews to a scrappy lil' music zine by the name of Scrawl. I don't remember where it was published or by who, and I'm not sure that everything I submitted was eventually published but they're in my archives, so here we go! These reviews from Scrawl #1...

THE CLARKS
Someday Maybe
(Way Cool/MCA Records)
These ears haven’t heard such unbridled adoration of the pop genre since THE SMITHEREENS burst onto the scene a decade or so ago. THE CLARKS explore a similar sort of pop/rock vein, substituting Scott Blasey’s sweet vocals and the band’s hook-ridden song structure for the aforementioned Jersey crew’s trademark riffs and booming baritone. Someday Maybe is the Pittsburgh quartet’s fine major label bow, providing listeners with an earful of some of the most engaging pop-influenced rock that’s come down the pike in a while. With an easy half-dozen radio-ready hits just waiting to be heard, it’s just a matter of time before Someday Maybe propels THE CLARKS across the threshold of obscurity into possible contender status.

DEAD FUCKING LAST
grateful...
(Epitaph Records)
Revoke my punk credentials if you must, but DFL’s Proud To Be album, produced by BEASTIE BOY Ad Rock, left me colder than last week’s leftover pizza. Their latest effort, grateful... was recorded live, thus achieving a true HC feel. My admiration of grateful... goes no further than that, though, DFL’s rapid, raucous two-minute shots of shouted lyrics and unrelenting rhythms hitting the listener like a policeman’s billy club. I prefer the subtlety of Epitaph label mates PENNYWISE or NOFX, who respectively prove that you can have intelligence and humor in punk rock, instead of just flogging people over the head with it. 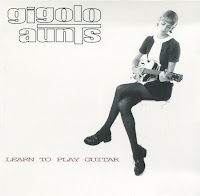 GIGOLO AUNTS
Learn To Play Guitar
(Wicked Disc)
There’s still plenty of room left in rock & roll for tuneful melodies and tasteful harmonies, a pair of musical traits showcased at length by GIGOLO AUNTS on their six-song EP Learn To Play Guitar. These are the kind of songs that rock intelligentsia eat up, even if they seldom hit the charts. Full-bodied and ringing with six-string innocence and rhythmic magic, tunes like “The Sun Will Rise Again,” “Wishing You The Worst” or the band’s engaging cover of JULES SHEAR’s wonderful “Kinda Girl” combine youthful exuberance with punkish energy and no little amount of musical skill. Learn To Play Guitar is a great introduction to GIGOLO AUNTS, a band you may have heard before and most likely will hear from again.

GOODBYE HARRY
I Can Smoke
(Cruz Records)
Featuring former ALL lead vocalist Scott Reynolds, GOODBYE HARRY offers up a musical fare of power punk on I Can Smoke, their sophomore effort. Unlike similar bands, GOODBYE HARRY’s Reynolds can actually sing, possessing a vocal range above a flat monotone or a cacophonic wail. He writes pretty decent songs, also, full of life and energy and great throw-away lines, mixing in elements of grungey rock and pure pop for a really invigorating hybrid. Not the hottest collection that I’ve heard this year, but certainly better than average, I Can Smoke is the kind of disc that tends to grow on you with every listen.

JUNKSTER
Junkster
(RCA Records)
I’ve always had a soft spot in my heart for Irish rock bands, particularly those with female vocalists. Unlike most bands from the Emerald Isle, which tend to have their feet firmly planted in Celtic traditionalism, JUNKSTER have their eyes turned to the stars. The band’s self-titled debut features the hauntingly beautiful vocals of Deirdre O’Neill and a wicked twin guitar assault by atmospheric experts Aidan Lane and Mick Creedon. Junkster eschews tradition-as-usual to mix earthy folk influences with ethereal pop and just enough electronic-inspired rhythms to keep things moving. The result is a mesmerizing eleven song sojourn into an otherworldly musical inner space that is guaranteed to feed your head even while prompting you to shuffle your feet. 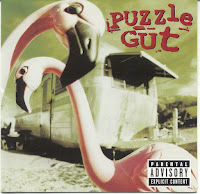 PUZZLE GUT
Puzzle Gut
(Trauma Records)
The initial eight or nine songs of PUZZLE GUT’s self-titled debut rock at an extremely satisfying level, with cuts like “Metamorphosis” or “The Wrong Man” combining roaring guitars, sludge-like rhythms and feedback level intensity in creating an honestly powerful musical experience. Somewhere around the last third of Puzzle Gut, though, the band takes a drastic wrong turn, falling hopelessly into screaming pretension and getting mired in hard rock clichés. I’d personally be quick to point the finger at producer Thom Panunzio, who certainly knows better, although there’s plenty of blame to pass around to the band. What might have been an impressive debut effort for PUZZLE GUT instead gets knocked down a notch to the level of “mostly listenable.”

SLUSH
North Hollywood
(Discovery Records)
With a sound that is as familiar as it is original, SLUSH manage to make hard rock interesting again. Drawing on influences beyond the usual unholy metallic trinity of LED ZEPPELIN, BLACK SABBATH and VAN HALEN, this talented foursome bring more finesse, skill and energy to a ballad like “So Volatile” than their musical peers can dredge up across an entire album. North Hollywood is full of great songs, unexpected musical twists and turns and is as entertaining as a rockin’ Saturday night. Johnne Peters’ amazing vocal range is complimented by Dean Zuckerman’s slashing guitar and a solid rhythm section in bassist Jamie Lau and drummer Kevin Costigan. North Hollywood kicks out some serious jams while managing to have a roaring good time. 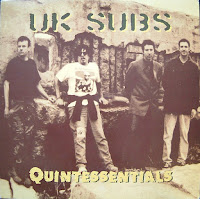 U.K. SUBS
Quintessentials
(New Red Archives)
One of the (very) few seventies-era grandfathers of punk who have remained relatively intact and musically vital, the U.K. SUBS have become an institution in their own right. Quintessentials, the first of two discs commemorating the band’s twentieth anniversary, covers the usual SUBS’ lyrical and musical territory, sixteen hard and fast cuts serving up verbal attacks at the police (“Killer Cops” “State of Alert”), the record biz (“Media Man”) or the military (“War On the Pentagon 1 & 2”), with more than a dash of old-fashioned anarchy (“AK47”) thrown in for good measure. Forget about the fat and forty Sex Pistols trying to reclaim their place in the sun. The U.K. SUBS never retired long enough to read their press clippings, instead delivering the stone cold punk rock goods for two decades now.

U.K. SUBS
Riot
(New Red Archives)
The second volume of the U.K. SUBS’ amazing twentieth anniversary celebration, both Riot and Quintessentials feature the original duo of vocalist Charlie Harper and guitarist Nicky Garratt with long-time bassist Alvin Gibbs and former Samhain drummer Dave Ayers. Both discs illustrate perfectly why the U.K. SUBS, overlooked by critics for two decades, have nonetheless been one of the major influences that hard-core punk has ever spawned. Time has done nothing to slow these guys down, Riot kicking ass through fifteen great songs, the band’s typical socio-political lyrical commentary backed by a muscular, no-quarter-asked musical onslaught. If you prefer your punk to be hard-edged rather than saccharine-sweet, then check out this pair of discs from the U.K. SUBS.

VARIOUS ARTISTS
Generations I - A Punk Look At Human Rights
(Ark 21 Records)
Punk checks back in on the social consciousness circuit with the release of Generations I, the first of four planned CD releases benefiting the Human Rights Action Center. All of the bands involved donated their tunes for the project, which is focused on raising awareness of and working for implementation of the U.N.’s Declaration of Human Rights. The VANDALS, DFL, PANSY DIVISION, PENNYWISE and BAD BRAINS all appear with new or previously unreleased tracks for Generations I, all contributing strong performances, but my favorites include Joe Strummer’s ELECTRIC DOG HOUSE and their album-opening “Generations,” MR. T EXPERIENCE’s “Ya, Ya, Ya, Ya” and THE JOHN DOE THING’s “Criminal.” Hell, there’s not a bad track on the disc, so buy it already and support this worthwhile cause. 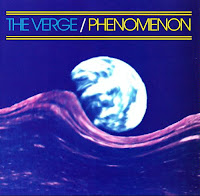 THE VERGE
Phenomenon
(Big Deal Records)
It’s refreshing, every now and then, to discover something among the musical hordes that stands out as unique, original and uncategorizable. Australia’s THE VERGE fits this description to a ‘T’, their Big Deal release Phenomenon throwing songs all over the old diversity scoreboard. Just when you’ve gotten these guys pegged as folkie wordslingers they hit you with an intriguing slice of pop-flavored rock, or maybe a little minimalist talking blues. When you think you’ve heard everything they’ve got to offer, they’ll run headfirst into an extended psychedelic jam that sounds like the bastard offspring of SYD BARRET and THE BEVIS FROND. In other words, there’s never a dull moment on Phenomenon, an entertaining, ingratiating and entirely unexpected experience.

VOLEBEATS
Sky and the Ocean
(Safe House Records)
With the whole “No Depression” alternative country thing struggling to become the next big trend in pop music, you can expect a lot of folks to be trading in their flannel and goatees for blue jeans and cowboy boots. Unfortunately, a lot of bands may get lost in the hype. Case in point, Detroit’s VOLEBEATS who prove with Sky and the Ocean that you can make tasteful, roots-oriented music without wearing your pretensions on your sleeve. Sky and the Ocean is a classy, understated collection of rock tunes with enough country and blues flavoring to pigeonhole it as alt-country but enough integrity to rise above it all. 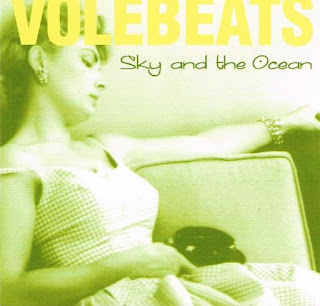