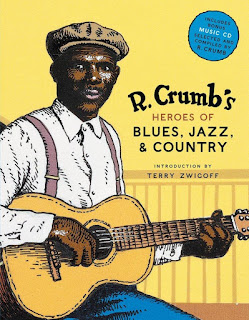 Cartoonist Robert Crumb is one of the most talented and controversial artists to rise out of the underground comix scene of the 1960s and ‘70s. One of the founding artists of Zap Comix and the creator of such counter-culture icons as Mr. Natural and Fritz the Cat, Crumb is also the writer and illustrator of The Book of Genesis, a best-selling collection of Bible stories. The subject of the award-winning 1995 documentary Crumb by filmmaker Terry Zwigoff, Crumb is one of America’s best-known and notorious artists.

Crumb is an obsessive record collector, his tastes running towards blues, jazz, and hillbilly music from the 1920s and ‘30s, as well as semi-professional musician with a handful of albums to his credit with his band R. Crumb and the Cheap Suit Serenaders. As shown by the 2011 hardback book, The Complete Album Cover Collection, Crumb is also a talented album cover illustrator and designer, bringing his unique, 1960s-forged aesthetic to bear on covers from the familiar Big Brother & the Holding Company’s Cheap Thrills album (featuring a young Janis Joplin) to better than a dozen vintage archival releases from Yazoo Records, his own Cheap Suit Serenaders records, and many others.

Crumb’s fascination with old-timey music hit its peak in the creation of his musician trading card sets during the early 1980s. Originally drawn from rare studio and family photographs, the art was created with an eye towards reproduction as 1950s-and-60s-styled bubblegum trading cards to be included with Yazoo Records album releases. As Crumb’s friend and former Cheap Suit Serenader Zwigoff writes in his introduction to the R. Crumb’s Heroes of Blues, Jazz & Country book, Yazoo owner (and fellow record collector) Nick Perls would instead package the cards in individual sets in order to give him something new to sell to supplement his meager income from LP sales.

“Heroes of the Blues,” a 36-card set, was the first to be completed by Crumb in 1980, followed by 1982’s “Early Jazz Greats,” another 36-card set, and 1985’s “Pioneers of Country Music,” a sumptuous 40-card set. The color artwork for all 112 trading cards has been collected in R. Crumb’s Heroes of Blues, Jazz & Country, an entertaining 240-page hardback book that includes all of the text from the original cards, as well as a 21-track CD that offers seven songs from each of the featured musical genres, culled from Perls’ collection and originally released by Yazoo Records.

Heroes of the Blues

While both the country and jazz sets include some incredible Crumb artwork, it’s the “Heroes of the Blues” section of R. Crumb’s Heroes of Blues, Jazz & Country that we’ll mostly concern ourselves with here. A total of 36 vintage bluesmen (and women) are portrayed by Crumb’s brush, some more intricate than others (depending on the original photographic source material, I guess), each accompanied by in-depth biographical information provided by blues historian Stephen Calt, author of the acclaimed Skip James biography, I’d Rather Be The Devil. The original 3”x4” trading card art is nudged up slightly to a size of roughly 5”x7” with no loss in brilliance or detail, and Crumb does an excellent job in capturing the spirit of the musicians portrayed.

“Heroes of the Blues” champions both well-known artists like Blind Blake, Blind Lemon Jefferson, Memphis Minnie, Mississippi John Hurt, and Skip James alongside the lesser-known bluesmen of the era like Furry Lewis, Peetie Wheatstraw, Tommy Johnson, and Rube Lacey. Crumb’s portraits of blues legends like Son House, Charley Patton, and Blind Willie Johnson are particularly striking, and would be welcome as fine art prints in the homes of many old-school blues fans.

The jazz and country sections of R. Crumb’s Heroes of Blues, Jazz & Country are equally inspired and informative. Among the better-known early jazzmen portrayed are Bix Beiderbecke, Jelly Roll Morton, Louis Armstrong, Duke Ellington, and Benny Goodman, while less-familiar jazz artists such as guitarist Eddie Lang and trumpet player King Oliver – both major influences on blues music – are provided a similar level of respect by the artist. Among the important early country artists included in that section are the influential Carter Family, Jimmie Rodgers, Uncle Dave Macon, and “Dock” Boggs, among others. Biographical text for these cards was provided by music historians David Jasen and Rich Nevins, respectively.

Robert Crumb’s painted artwork for the three card sets collected by R. Crumb’s Heroes of Blues, Jazz & Country is nothing short of brilliant, and would appeal to any fan of early American roots music, as well as Crumb fanatics and comic art collectors. The historical and biographical text accompanying each card serves to whet the reader’s appetite for more information on the artists, as Crumb brings a true record collector’s enthusiasm and zeal to each portrait.
The 21-song CD accompanying the book is a bonus, the tracks chosen by Crumb himself and including rare 78rpm recordings from blues artists like Blind Willie McTell, Charley Patton, and Frank Strokes as well as country pioneers like “Dock” Boggs and jazz legends King Oliver and Jelly Roll Morton. Altogether, R. Crumb’s Heroes of Blues, Jazz & Country is a treasure of American music, preserving the past for future generations. (Abrams Comicarts, 240-page hardback w/CD, published November 1, 2006)