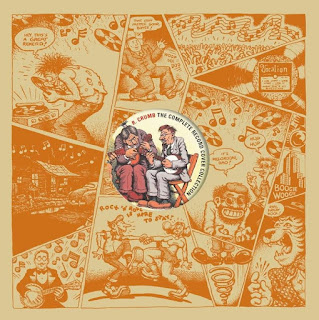 Cartoonist Robert Crumb came to prominence during the 1960s, contributing significantly to the birth and evolution of underground “comix” with his highly-stylized and uniquely-exaggerated artwork. One of the founders of Zap Comix, Crumb created the nearly-ubiquitous “Keep On Truckin’“ comic, which would become a 1970s pop culture icon, as well as such memorable counter-culture characters as Mr. Natural, Fritz the Cat, and the Devil Girl.

Crumb is also among the most controversial illustrators of his era, often slammed by critics for the purported misogynist nature of many of his sexually-charged, fantasy-fueled strips. Charges of racism have also been leveled against Crumb, who is guilty at a minimum of racial insensitivity for his stereotyped portrayals of African-American men and women. None of these criticisms dilute a powerful and prolific body of work, however, Crumb’s mainstream comics such as American Splendor – in collaboration with writer Harvey Pekar – or The Book of Genesis, the artist’s interpretation of Bible stories, rising to the level of genius.

Seldom mentioned in any discussion of Crumb’s artistic milieu is his love of music and his work in preserving the history of the blues, jazz, and country music. An enthusiastic collector with an impressive library of 78rpm recordings in the aforementioned genres, Crumb is also a semi-professional musician. R. Crumb and his Cheap Suit Serenaders – a revolving roster of like-minded amateur instrumentalists that has included fellow cartoonist Robert Armstrong and filmmaker Terry Zwigoff – have released three albums of old-timey blues, jazz, bluegrass, and swing music from the 1920s and ‘30s. Crumb played mandolin with the East River String Band on several recordings, and has also put together a number of compilation albums featuring songs culled from his personal collection of 78s.

Crumb is also well-known, albeit underrated, as an illustrator of record album covers. Working in a medium where, perhaps, illustrator William Stout is his only rival, Crumb has brought a unique aesthetic to his album cover artwork that is both steeped in tradition and informed by the underground cartoon work he created in the 1960s. The best of Crumb’s album cover and other music-oriented artwork has been gathered in a collectors’ edition titled The Complete Album Cover Collection. A beautifully-illustrated, sparsely-annotated, roughly 10” square hardback (around the size of a 78rpm record), Crumb’s work is certainly to be of interest to any fan of old-school blues and jazz music.

Perhaps Crumb’s best-known album cover is Big Brother & the Holding Company’s Cheap Thrills, the 1968 album that introduced the world to singer Janis Joplin. Featuring a series of panels that depict the album’s song titles, the cover draws its inspiration from the psychedelic ‘60s San Francisco rock scene that the band came up in, and is actually one of Crumb’s least-entertaining covers. More inspired is the artist’s cover for the 1976 compilation Harmonica Blues, an album of blues, jazz, and country harmonica performances from the 1920s and ‘30s that, while sparse at first glance, perfectly frames a solitary figure walking down a long country road, presumably in the south, playing away on his harmonica, his back turned to the viewer. Created for Crumb’s friend Nick Perls, who owned Yazoo Records, it is a work of enduring elegance.

Through the years, Crumb would draw almost a dozen-and-a-half album covers for Yazoo releases, many of them included in The Complete Album Cover Collection and nearly all of them similarly inspired works. Among my personal favorites is the cover for the Blind Boy Fuller collection Truckin’ My Blues Away, the Casey Bill Weldon and Kokomo Arnold collection Bottleneck Guitar Trendsetters of the 1930s, and the label’s History of Jazz compilation. Crumb also did some brilliant work for other labels, including archival specialists Arhoolie Records and Barrelhouse Records, the latter label’s Maxwell Street Alley Blues a two-toned marvel.

Crumb’s immersion in music illustration doesn’t begin and end with the aforementioned album covers. The Complete Album Cover Collection also displays a wealth of Crumb artwork, including logos for labels like Ordinary Records, Blue Goose, and Oboy Records as well as the actual album labels themselves, advertisements, artist portraits, and more. His illustrations for Michael Bloomfield’s “Me And Big Joe” article, which originally appeared in High Times magazine, will have me scouring eBay for a copy of the 1980 issue. Not all of Crumb’s works are strictly illustrated, either, covers for the Cheap Suit Serenaders albums integrating antique-looking photos with colorful drawn artwork.

The Complete Album Cover Collection won’t appeal to all blues fans, and some may be offended by Crumb’s bawdier, more suggestive artwork (mostly PG-13 by today’s standards, but also some R-rated material contained herein). There is surprisingly little art duplicated here from Crumb’s Heroes of the Blues trading cards (and accompanying jazz and country sets), or from the hardback cover collection of the cards. For those who appreciate Crumb’s musical obsessions, however, The Complete Album Cover Collection would make a welcome addition to any blues book collection. (W.W. Norton & Company, 96-page hardback, published November 7, 2011)