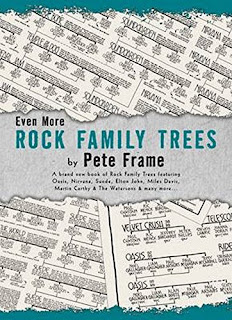 Music Journalist Pete Frame has enjoyed the sort of career that any music fan would give his or her eye teeth to experience. Frame was the founder of the British music magazine ZigZag, acting as the publication’s editor from 1969 through 1973, and again later from 1976 through 1978. He managed the English cult band Starry Eyed & Laughing, worked as an A&R man for the Charisma Records label and as press officer (publicist) for the legendary Stiff Records label.

Since 1979, Frame has made his living directly as a writer, contributing to publications like New Music Express, Melody Maker, Rolling Stone, and others. He has also been a producer on several documentaries for BBC radio, including tributes to Buddy Holly, Leonard Cohen, Elvis Presley, and Frank Zappa. Frame is best-known, however, not for his pen but rather for his penmanship, as the creator of intricate, detailed, and fascinating “rock family trees” that provide a genealogical history of various bands, right down to the names of individual members and what instrument they play.

Frame first began creating his rock family trees for ZigZag, putting together a chart on the Byrds for an issue in 1970, following it with a chart for British blues pioneer John Mayall a couple of issues later. By the magazine’s 21st issue, published in July 1971, Frame landed on the “family tree” format that he’s followed ever since, putting together a complex Al Kooper genealogy. These rock family trees have been used in the packaging of recordings by folks like Eric Clapton, Iron Maiden, Talking Heads, and many more, and were the basis for two six-part BBC television series during the 1990s that were narrated by the late John Peel.

After taking some time to put together the exhausting and entertaining The Restless Generation, a 500-page history of British rock in the 1950s, a decade of Frame’s work has culminated in the recently-published Even More Rock Family Trees. Since that first chart in ZigZag, Frame has created some 140 family trees tying together over 2,000 bands and artists. Today, as they were 40 years ago, Frame’s rock family trees are hand-drawn and notated on large 4’ x 3’ sheets of paper that are then scanned and reduced in size for publication. Sometimes a particular family tree is so crammed with details that a reader has to reach for a magnifying glass (or, for us old geezers, magnified reading glasses) to take it all in.

Even More Rock Family Trees features 33 absurdly-annotated genealogical charts of various bands that were created by Frame from the 1980s through the 2000s, and while there is some overlap with previous collections, there really is precious little duplication between volumes. The over-sized book begins with a bare-bones history of England’s famed Creation Records label, outlining the connections between bands like My Bloody Valentine, Teenage Fan Club, the Boo Radleys, and Oasis, among others. Another quite detailed tree examines the 15 different Jesus & Mary Chain line-ups, including information on the band’s recordings during the 1980s and ‘90s.

Frame doesn’t restrict his work to just British rock history. His “Grunge: The Sound of Seattle” digs deep into the roots of popular bands like Pearl Jam, Nirvana, and Soundgarden, outlining the evolution of grunge from the early 1980s through the current superstardom of the Foo Fighters. Frame reaches back to his own youth for a chart on American R&B legends the Drifters, following the troubled band from its formation by singer Clyde McPhatter in 1953 to the hit-making, late-1950s Ben E. King years, through the final shadow of the band that gave up the ghost during the mid-1980s.

While Frame has a taste for the classic rock of the 1960s and 1970s, he’s not afraid to jump in and chronicle more recent bands like Suede or the Lyres. He’s at his most comfortable with the oldies, though, and his four-page extended Allman Brothers Band family tree is a thing of beauty for the hardcore fan. “Surf City Here We Come!” outlines the history of the Beach Boys, Dick Dale, the Surfaris, and other like-minded bands while his detailed outline of Fleetwood Mac ties together John Mayall’s Bluesbreakers, Rod Stewart, Chicken Shack, and Savoy Brown in a tree of many branches.

The careers of Elton John, Steve Winwood, Roger McGuinn, and Eric Clapton benefit from Frame’s keen eye and steady hand; ditto for Roxy Music, Rainbow, Fairport Convention, and Emerson, Lake & Palmer, while Frame’s history of the Boston folk scene, augmented by quotes from artists like Geoff Muldaur and Amos Garrett, shines a light on a wealth of often overlooked musical talent. Only one chart in Even More Rock Family Trees wasn’t created by Frame, his acolyte Paul Barber putting together a fantastic timeline of jazz great Miles Davis’s live bands from 1955 to 1975.

Admittedly, Frame’s rock family trees books are for the diehard rock ‘n’ roll geek or OCD-inflicted music historian, but they’re also a heck of a lot of fun. For those of us who have spent untold hours peering through the cryptic credits of the albums and CDs that we’ve spent a lifetime collecting, trying to piece together the minutiae of our favorite bands and artists, Frame’s efforts seem downright Herculean.

Even More Rock Family Trees carries on the tradition of excellence begun by artist Pete Frame – and these rock family trees are, indeed, works of art – over 40 years ago. Be careful, though, ‘cause once you dig into one of these books, you’re going to lose hours at a time peering through the pages. (Omnibus Press, published April 1st, 2012)