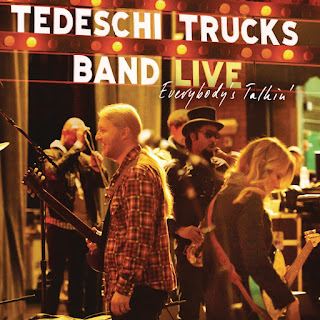 On paper, it seemed like a perfect match – take the husband and wife team of Derek Trucks and Susan Tedeschi, surround them with nine talented musicians culled from their individual bands, put them in a studio and see what happens. Considering that Tedeschi and Trucks are two of the most popular, talented, and innovative artists on the blues scene today, expectations were high for the Revelator album. Nobody could have predicted what happened next, though. The album has spent over a year on the blues chart and won both a Grammy® and a Blues Music Award, while Tedeschi and Trucks also took individual BMAs.

Revelator was supported by a lengthy tour by the eleven-piece Tedeschi Trucks Band, several dates of which were recorded for Everybody’s Talkin’, a deluxe two-disc live set that is a real gift for the fans that climbed on board with the first album. In concert, the band stretches out on stage to jam on their signature blend of blues, rock, gospel, Southern soul, and funk music. While the two CDs here only offer up a mere eleven songs, every one of them is a revelation, with the well-chosen cover songs so perfectly meshing with the band’s original material that the listener would be hard-pressed to tell the difference if they weren’t already familiar with the song.


The set kicks off with the Fred Neil-penned title track, a well-worn chestnut that was recorded by the great Harry Nilsson for the 1969 movie Midnight Cowboy. Since Nilsson’s up-tempo version first rode the airwaves to top ten chart success, the song has been covered in dozens of styles, from King Curtis’s jazz-tinged R&B take to Stephen Stills bluesy, guitar-driven version. Tedeschi straddles a line between the two, applying her warm voice to the Southern soul-flavored arrangement as the band creates a funky, fat groove behind her vocals, which capture the wistful nature of Neil’s original folkish lyrics. Trucks spices up the song with a tasteful, albeit short solo that cranks up the amperage for a big finish.

With a high energy level established, Everybody’s Talkin’ only soars higher towards the stratosphere from here. The hauntingly beautiful “Midnight In Harlem” is provided a (slightly) raga-styled intro with Trucks’ nimble fretwork at the fore before rolling into a mid-tempo performance that is dominated by Tedeschi’s languid, sultry vocals and Kofi Burbridge’s lively keyboard riffs. Another track from Revelator, the seeped-in-the-Delta “Learn How To Love,” is stretched out at better than twice its original length, the song dominated by Trucks’ fierce guitarplay, icy blasts of horn, the explosive  twin drums of Tyler Greenwell and J.J. Johnson, and Tedeschi’s powerful, roaring vocals. Trucks’ scorched-earth solo a little more than three minutes in is strong stuff, indeed.


“Bound For Glory” is introduced by Trucks’ scrappy Mississippi front porch country-blues picking before sliding into a deep Southern rock groove. Bassist Oteil Burbridge is the band’s secret weapon, a talented fat-string player that provides a subtle but ever-present rhythmic foundation for the rest of the band build upon. Tedeschi’s vocals sound a lot like Bonnie Raitt here, soaring from a whisper to a joyous shout, while the performance itself evolves into a swaggering instrumental jam with Kofi’s slippery keyboard licks and a spry percussive backdrop leading the way.

While usually credited to Muddy Waters, the raucous “Rollin’ and Tumblin’” has become a hallowed blues standard, with versions recorded by everybody from Elmore James and Memphis Slim to Cream and Johnny Winter. Tedeschi and Trucks build off the James’ version here, the band delivering an energetic shuffle behind Trucks’ raging guitar and Tedeschi’s roaring vocals. Disc one closes out with an inspired take on songwriter John Sebastian’s “Darling Be Home Soon,” Tedeschi displaying her excellent emotional phrasing on the song’s wan lyrics, backing harmony vocals lending a sort of Stax/Motown gospel/soul vibe to what is a wonderfully moving performance. 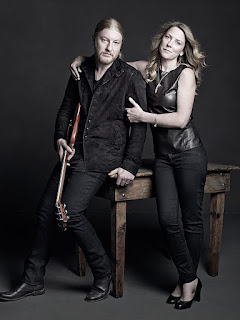 Disc two is slightly shorter that the first set’s 70-minute runtime, clocking in at four songs and three-quarters of an hour, but the performances are no less potent. The R&B gem “That Did It” is afforded a big band-styled performance with gospel revival fervor, Tedeschi channeling her inner Koko Taylor with fine soul-shouter vocals bolstered by her often-overlooked guitar playing, which lends great tone and texture to the Bobby “Blue” Bland classic. A finger-snapping cover of the great Stevie Wonder’s “Uptight” is delivered as a quarter-hour-plus long rant ‘n’ rave-up that mix soul and jazz with Oteil Burbridge’s scat-singing, Tedeschi’s fine vocals, Kebbi Williams’ manic sax, and some of Trucks’ greasiest slide-guitar playing on the record.

Another Revelator gem, “Love Has Something Else To Say,” is funked-up on steroids, cranked way up to eleven minutes on the back of the R&B drenched horns of saxophonist Williams, Maurice Brown’s trumpet, and Saunders Sermons’ trombone. The horns get to be a bit much for my tastes, a little too free-wheeling and bleating for these ears, but Trucks’ fluid solos are just the tonic you need, and Sermons’ sonorous vocals provide a fine counterpoint to Tedeschi’s sweeter tones. The Sam Cooke classic “Wade In The Water” provides a big finish to Everybody’s Talkin’, showcasing everything that is good and grand about this band. A gospel-blues tune with hints of swamp-blues malevolence and dark-hued lyrics, the band’s reverent vocal interplay is complimented by a claustrophobic instrumental arrangement and shards of broken-glass guitar and crafty percussion work that slips in beneath the radar.


While the Tedeschi Trucks Band’s Revelator provided fans of both Susan Tedeschi and Derek Trucks with a long-awaited musical collaboration, the album’s mainstream appeal has gone a long way towards bridging the gap between rock, pop, and blues fans across the globe. Everybody’s Talkin’ takes the band’s enormous musical chemistry one step further, showcasing an outfit at the top of its game and opening the door for break-out success. If you were lucky enough to catch the Tedeschi Trucks Band on tour, Everybody’s Talkin’ will be a fond souvenir of the experience, and if you missed them last time around, this live set will assure that you’ll never make that mistake again! (Sony Masterworks, released May 22, 2012)