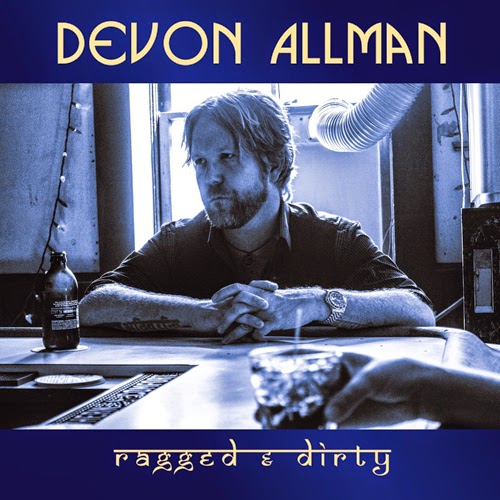 Devon Allman – Greg Allman’s son – has kicked around the blues-rock scene for a decade and a half now, first as frontman of Devon Allman’s Honeytribe, and later as one of the main creative voices in the roots ‘n’ blues supergroup Royal Southern Brotherhood. It’s been obvious from the start, however, that Allman has long been searching for his own sound – whereas the Honeytribe album Space Age Blues evoked more of a jam-band vibe, his proper solo debut, 2013’s Turquoise, was a tasty gumbo pot full of Southern soul, blues, funk, and rock that showcased Allman’s talents as a songwriter.


With his sophomore solo effort, Ragged & Dirty, Allman takes another all-important step towards crafting his own unique musical vision, the guitarist setting aside his Southern roots for a moment and sojourning to Chicago along a well-worn path traveled by so many bluesmen before him. Working with seasoned veterans from the bands of Charlie Musselwhite, Billy Branch, and Buddy Guy, Allman and producer/musician/songwriter Tom Hambridge have put together an electrifying collection of songs that dredge up half-forgotten memories of 1960s-era Chi-town soul and blues and vintage ‘70s rock riffs while somehow retaining a contemporary essence.

Ragged & Dirty kicks off with the stomp ‘n’ stammer of “Half The Truth,” a Foghat styled dinosaur-rocker that offers big rhythms, slippery guitarwork, and an infectious groove. Hambridge plays the drums, hitting the cans with an effect like a machine gun’s recoil while Allman gets funky with the git and keyboardist Marty Sammon adds background flourishes from his Hammond B3. It’s an energizing song, and probably goes over gangbusters in a live setting ‘cause it simply jumps off the turntable, grabs you by the ears, and demands that you pay attention.

Penned by Hambridge and country-rocker Lee Roy Parnell, “Can’t Lose Them All” is probably the closest that Allman comes here to his legendary father, not so much in his vocal delivery but rather in the overall sound and texture of the song, which simply glows with heart and soul. Allman’s stinging fretwork here is fluid, almost jazzy, but provides many shades of blue while his vocals are similarly sultry as the band delivers a subtle groove in the background. Hambridge custom-wrote several songs for Ragged & Dirty, and “Leavin’” is one of the best, a twang ‘n’ bang roots-rocker that features Allman’s acoustic strum and Bobby Schneck Jr.’s leads, the two players’ guitars intertwined to create a mesmerizing effect.


Allman proves himself a fine interpreter of other artist’s work here, beginning with a loving cover of the Spinners’ R&B classic “I’ll Be There.” Allman’s taut, soulful guitarplay here is surpassed only by his emotional vocals, which manage to capture the feeling of the original while adding a few tears to the lyrics; Wendy Moten’s background vocals offer a nice counterpoint while Sammon’s keyboards bring an air of elegance to the arrangement. Allman tackles bluesman Otis Taylor’s difficult “Ten Million Slaves” with reverence and authority, his vocals dropping into a lower register to properly capture the serious story told by the lyrics. With Felton Crews’ heavy bass line throbbing in unison with Hambridge’s tribal percussion, Allman’s somber vocals relate the tragic tale of African slaves being brought to America. The anguish of the lyrics is underlined by Allman’s scorching fretwork, which offers a thinly-veiled menace throughout the song.

The title track of Ragged & Dirty is an old Luther Allison cut, and Allman does it proud here. He and the band develop funky groove for the tune, Allman’s slightly electronically-altered vocals adding a nasty edge to the words, his high-flying guitar perfectly welding psychedelic-rock and blues together for a powerful rendition of a classic Allison performance. Allman penned a few original tunes himself for the album, the best of these being his ode to the Windy City, “Midnight Lake Michigan.” A late-night blues jam with a rock ‘n’ roll heart, just about everything on this instrumental – from Allman’s imaginative, scorched-earth guitarplay to Sammon’s moody keyboard fills to Hambridge’s explosive drumwork, and everything in between – is simply perfect, the performance telling a story without uttering a word.

Allman’s other originals also excite, from the funky rocker “Blackjack Heartattack” to the traditionally-styled “Back To You.” The former is a rapid-fire, foot-shuffling blues-rock Godzilla with an undeniable groove, monster fretwork, and a feedback-tinged wall of sound while the latter is a throwback to the Chicago blues sound of the 1970s with strong vocals, expressive guitar licks, humming keyboards, and a solid, if subtle rhythmic backbone. The album closes with the acoustic blues tune “Leave The City,” Allman’s “back to the country” screed offering nuanced vocals, supple resonator guitar pickin’, and Hambridge’s minimal percussion. It’s a fine closer, with a strong albeit gentle vibe that displays another side of Allman’s multi-faceted musical personality.


There’s no doubting Devon Allman’s enormous talents, which are frequently overlooked in discussions in favor of his familial pedigree. Sit down and give Ragged & Dirty a spin, though, and you’ll discover a young artist that is blazing his own musical path, not necessarily following in his famous father’s footsteps but rather creating his own intoxicating blend of blues, soul, and rock ‘n’ roll. Ragged & Dirty is Allman’s best album to date, but given the road he’s walking, my guess is that the best is yet to come. Grade: A- (Ruf Records, released October 14, 2014)