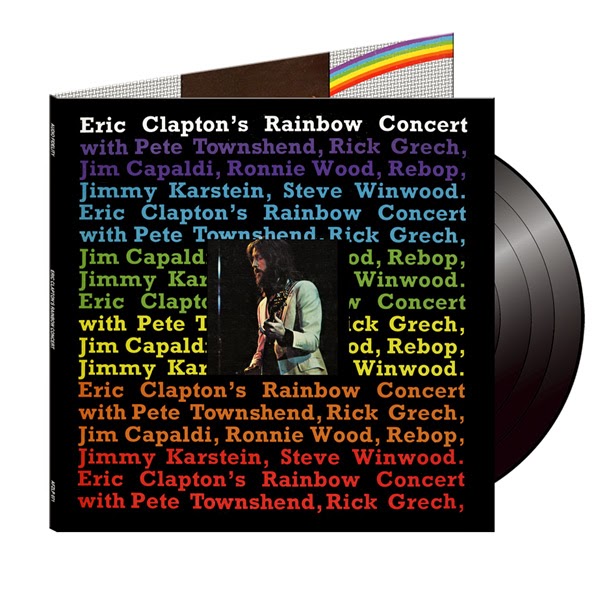 After submersing himself on tour with Delaney & Bonnie & Friends after the break-up of the supergroup Blind Faith, guitarist Eric Clapton worked with Delaney Bramlett and members of the band like keyboardist Bobby Whitlock and sax player Bobby Keys in creating his self-titled 1970 solo debut. The album spawned a Top 20 hit with Clapton’s cover of J.J. Cale’s “After Midnight,” the album itself hitting #13 on the Billboard magazine albums chart.

It would be almost four years until the guitarist would record a follow-up to Eric Clapton (I’m not counting the Derek & the Dominos LP), during which time he struggled with heroin addiction. Aside from a brief appearance in August 1971 at friend George Harrison’s Concert for Bangladesh, Clapton was a virtual recluse. Another friend, the Who’s Pete Townshend, convinced Clapton to commit to a “comeback” performance in January 1973. Held at London’s Rainbow Theatre, the guitarist was backed by a number of talented compatriots, including former Blind Faith bandmates Steve Winwood and Rick Grech, Traffic’s Jim Capaldi, the Faces’ Ron Wood, Townshend and others.

The show was a resounding success, resulting in the release of the Eric Clapton’s Rainbow Concert album in September 1973. Despite Clapton’s lengthy hiatus from music, the album sold like gangbusters, going Top 20 in both the U.S. and the U.K. On December 2nd, 2014 Marshall Blonstein’s Audio Fidelity label will add to its impressive run of Clapton reissues with a limited edition, re-mastered release of Eric Clapton’s Rainbow Concert on glorious 180gr vinyl. The LP includes the original album’s six performances, over half an hour of music on two sides, including red-hot takes of Cream’s “Badge,” Blind Faith’s “Presence Of The Lord,” Clapton’s version of “After Midnight,” and a cover of Jimi Hendrix’s classic “Little Wing.” The album is an often-overlooked item in Clapton’s extensive back catalog, and now it’s back on vinyl where it belongs! 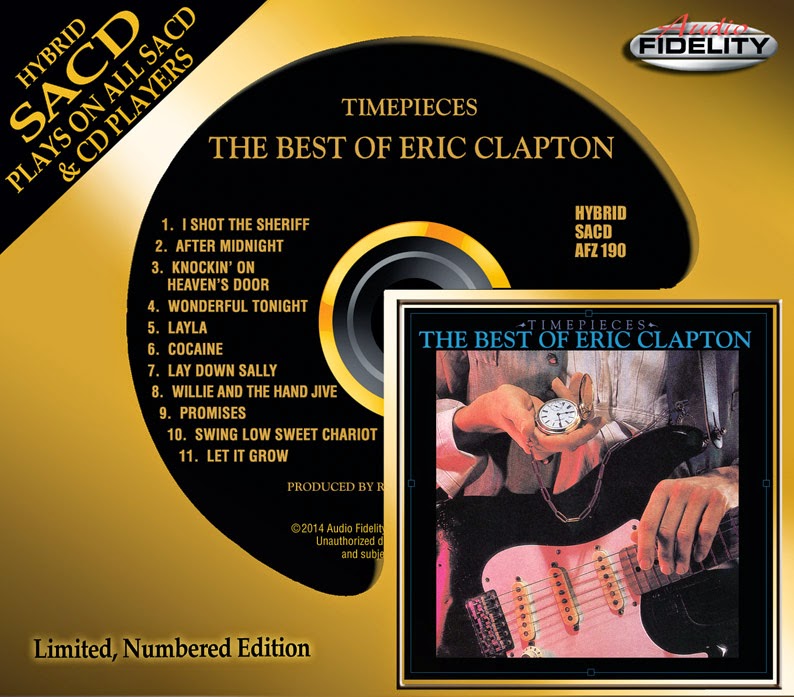 Audio Fidelity is in the Eric Clapton business in a big way, releasing several of the guitarist’s albums as high-quality hybrid SACDs, and on November 25th, 2014 the label will reissue Clapton’s Time Pieces, one of the best of glut of compilation albums released under the Clapton name. Time Pieces documents some of the best of Clapton’s 1970s-era work, including hit chart-topping “I Shot The Sheriff,” from his 1974 comeback album 461 Ocean Boulevard, and the full-length album version of Derek & the Dominos’ “Layla.”

Originally released in 1982, Time Pieces also included a rare non-album track among its eleven songs – Clapton’s take on Bob Dylan’s “Knockin’ On Heaven’s Door.” Most of the rest of the comp was culled from either 461 Ocean Boulevard (“Willie & the Hand Jive,” “Let It Grow”) or 1977’s Slowhand (“Wonderful Tonight,” “Cocaine,” “Lay Down Sally”) with only “After Midnight” included from Clapton’s solo debut, and one track apiece from Backless and There’s One In Every Crowd. Still, Time Pieces is worthy of a sonic upgrade, and the music inside the grooves is timeless, representing some of Clapton’s best and most memorable performances.

Buy the SACD from Amazon.com: Timepieces: The Best of Eric Clapton
Posted by Rev. Keith A. Gordon at Saturday, November 15, 2014