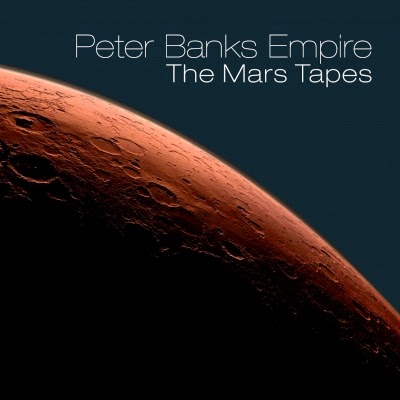 Guitarist Peter Banks was a criminally-underrated talent who passed away too damn young in March 2013. A founding member of progressive-rock legends Yes, Banks left the band after a couple of years and two albums to form Flash, which pursued a similar style of prog-rock, scoring a Top 40 album with its self-titled 1972 debut.

For long-suffering Banks fans that have been looking for new music from the underrated artist, Gonzo Multimedia has released The Mars Tapes, a two-disc collection credited to "Peter Banks Empire" that rescues a treasure of long-lost Empire recordings. The album features unreleased material culled from the band’s 1979 rehearsals for their Mark III album. The band was rooted at Mars Studio in Los Angeles for six months while working on the album, recording almost everything they played for posterity, resulting in the wealth of unheard music represented by The Mars Tapes. Empire at the time included Banks and Jordan, keyboardist Paul Delph, bassist Brad Stephenson, and drummer Mark Murdock.

In a press release for The Mars Tapes, Murdock says “the Peter Banks Empire ship set sail against the ever-changing music world, and was uncompromising in producing a range of material with Peter Banks’ ‘Signature Guitar Sound and Style,’ while incorporating themes of the time period in which the band existed and also reliving the past by playing songs from the early Empire catalog and even a Yes version of ‘Something’s Coming.’ There are various tracks on The Mars Tapes that also represented a ‘Work In Progress,’ which were both instrumental and vocal orientated. Empire was anticipating to make some big waves in the music scene, but the waves never reached the shore – until now!"

If you're a prog-rock fan unfamiliar with the six-string skills of Peter Banks, you owe it to yourself to find out more about a guitarist that sits alongside legends like Robert Fripp, Steve Howe, and Steve Hackett in terms of talent and influence.

Buy the CD from Amazon.com: Peter Banks Empire's The Mars Tapes
Posted by Rev. Keith A. Gordon at Friday, November 14, 2014