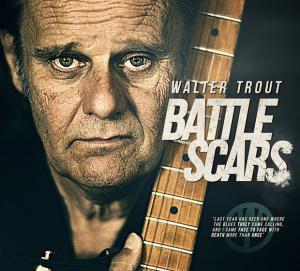 Listening to “Almost Gone,” the lead-off track from blues-rock guitarist Walter Trout’s upcoming album Battle Scars, all I can say is “Damn!” If this white-hot slab o’ scorching guitar and anguished vocals doesn’t sucker-punch your soul, well, all I can say is that it must suck to be you…

On October 23rd, 2015, Provogue Records will release Trout’s Battle Scars, the much-anticipated follow-up to the guitarist’s acclaimed 2014 album The Blues Came Callin’, and his first since undergoing life-saving liver transplant surgery last year. If Trout’s previous album was reflected the uncertainty and fear caused by his illness, Battle Scars is a chronicle of Trout’s fight to survive, the singer/songwriter staring down death and living to tell the tale.

One thing for certain, as shown by the heat and energy of “Almost Gone,” is that Trout is back and better than ever. In a press release for Battle Scars, Trout says “I’m thrilled about this album, about my life and about my music. I feel that I’m reborn as a songwriter, a singer, a guitarist and a human being. I have a new chance at being the best musician and the best man that I can be. And I’m incredibly happy and grateful.”

A little more than a year ago, Trout was lying in a hospital bed, unable to move or speak as his liver was failing. After receiving the transplant in May 2014, and suffering through the difficult recuperation process, Trout began the long and tortuous process of healing. “At first I wasn’t strong enough to play a single note on the guitar,” he says, “but as I regained my strength, the music came back to me. Now when I pick up the guitar, it is liberating, joyful, and limitless. I feel like I’m 17 again.”

Arriving in Los Angeles in 1973, Trout was schooled in the blues while playing behind legends like John Lee Hooker, Big Mama Thornton, Finis Tasby, and Lowell Fulsom, among others. Trout burnished his blues bona fides first as a member of blues-rock legends Canned Heat, then moving on to play five years as part of British blues legend John Mayall’s famed Bluesbreakers band. Trout launched his solo career in 1989 with his debut album Life In The Jungle, and has since become one of the blues most beloved artists, earning the guitarist numerous awards and accolades.

Before his illness sidelined the hard-touring guitarist, Trout had planned on celebrating the 25th anniversary of his solo career with a lengthy tour and deluxe vinyl reissues of many of his solo albums. Rescued From Reality: The Life and Times of Walter Trout, Trout’s autobiography, was written with noted British music journalist Henry Yates (full disclosure – Henry is my editor at The Blues magazine) and released to great reviews in 2014. Although the planned 2014 tour didn’t happen, Trout returned to the stage this spring and plans on touring heavily in support of Battle Scars with his band – keyboardist Sammy Avila, bassist Johnny Griparic, and drummer Michael Leasure.

As for all his loyal fans that stood by Trout during his illness, and donated over $240,000 to help with his medical expenses, the guitarist says “I don’t take this lightly. Marie [his wife] says that all of the people who donated to our fundraiser for my medical expenses bought stock in me and my liver. When I play for them now, I have a responsibility to give back and offer the very best that I have.” As anybody who has ever attended one of his shows already knows, Walter Trout has always been an electrifying live performer. Given a new lease on life after a lengthy struggle, and with the “battle scars” to prove it, Trout will be paying his fans back one show at a time.