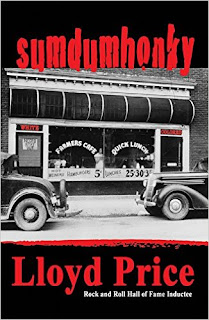 New Orleans R&B legend Lloyd Price is best known for his string of late 1950s/early ‘60s chart-topping hits, classic songs like “Lawdy Miss Clawdy,” “Stagger Lee,” and “Personality,” several of which crossed over from the R&B chart to become Top 10 mainstream hits as well. Price’s songwriting skills are often overshadowed by his dynamic and powerful vocals, but his songs have also been recorded by artists as diverse as the Beatles, Elvis Presley, Jimi Hendrix, Fleetwood Mac, and Dr. John, among many others. Price was inducted into the Rock & Roll Hall of Fame in 1998 and the Louisiana Music Hall of Fame in 2010.

Along with Price’s status as a recording artist and live performer, he has also found success as a pioneering businessman. His Double L Records released soul giant Wilson Pickett’s first recordings, and Price was one of the first African-Americans to own and operate a nightclub in New York City (Lloyd Price’s Turntable, on 52nd and Broadway). His Icon Foods brand is known for its Lawdy Miss Clawdy food products and Energy-2-Eat snack bars, and Price also has his own line of clothing and collectibles. Price’s historic career has spanned seven decades and, at 82 years old, the singer shows no signs of slowing down any time soon.

Needless to say, Price has stories to tell, and on October 13, 2015 the singer’s book sumdumhonky will be published by Cool Titles. No garden variety autobiography – he already covered that territory with his 2011 book The True King of the Fifties: The Lloyd Price Story – Price’s sumdumhonky mixes stories from across Price’s lengthy and storied career with his unique perspective on matters of race. No matter how successful he may have been in bridging the pop and R&B charts with his music, Price was still too-often judged by the color of his skin, and he writes frankly and openly of the racism he found in his hometown of Kenner, Louisiana and beyond – bigoted policemen, record executives trying to take advantage of him, and of his eye-opening sojourn to Africa.

“Times have changed since I was born more than eighty years ago,” Price says in a press release for the book. “Blacks can now drink from the same water fountain as white people, eat at the same restaurants, ride in the front on public transportation, get a bank loan, hold jobs in management and we don’t get lynched quite as often as we used to.”

As a Southern-born African-American who came up through the Civil Rights era of the 1950s and ‘60s, Price experienced his share of racial discrimination, and he takes on the hatred and bigotry he’s suffered with insight and humor. If you’re looking for an intelligent, first-hand account of where race and rock ‘n’ roll intersect, look no further than the great Lloyd Price’s sumdumhonky.