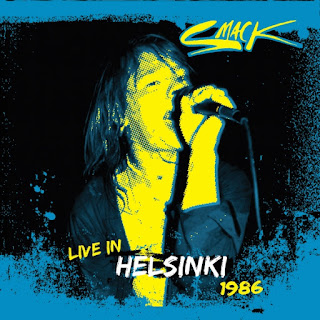 Chances are that you’ve never heard of them, but take my word for it – Smack were one of the great unknown rock ‘n’ roll bands of the 1980s. Nirvana’s Kurt Cobain was enamored of the of the band, covering Smack’s “Run Rabbit Run” in concert during his ground-breaking band’s early, pre-fame days. The influence of Smack’s punky, ramshackle sound and on-stage ferocity can be heard in bands like Guns N’ Roses and D Generation, but unlike their fellow countrymen Hanoi Rocks, Smack never achieved even cult status stateside.

We’re going to get another chance to discover Smack, however, on August 7th, 2015 when Cleopatra Records releases Helsinki 1986, a previously-unreleased concert CD from the too-often-overlooked Finnish rockers. The fourteen-track disc includes rare photos of the band as well as liner notes by Jyrki 69 of the Finnish Goth band The 69 Eyes. Smack was at the top of its game in ’86, touring in support of their sophomore album, 1985’s Rattlesnake Bite (their acclaimed debut, Smack On You, was released in 1984).

The band’s electrifying mix of the Stooges, the Sex Pistols, and the New York Dolls won converts wherever people heard the band, but Smack suffered from being an indie band with poor album distribution stateside. Helsinki 1986 should bring the band a new audience and, with little luck, maybe we’ll get CD reissues of Smack’s hard-to-find studio albums down the road sometime.