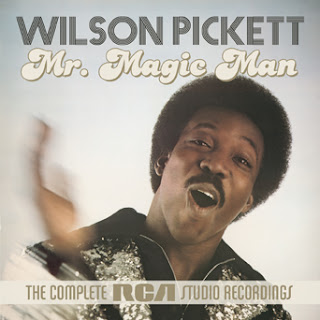 One of the true giants of American soul music, singer Wilson Pickett scored 17 Top Ten hits on the R&B chart during the ten years 1962 to ’72. He had a total of 50 charting songs during his career, including such classic hits as “In The Midnight Hour,” “Land of 1,000 Dances,” “Mustang Sally,” and “Funky Broadway.” Pickett’s influence on a generation of blues, soul, and rock ‘n’ roll artists is undeniable, and the singer was inducted into the Rock and Roll Hall of Fame in 1991.

Pickett spent almost the entire 1960s with Atlantic Records, who lent him out for a while to the Memphis-based Stax label. During this prolific period, Pickett recorded a dozen albums for Atlantic/Stax and scored his biggest hits. After leaving Atlantic in the early 1970s, the singer landed at RCA Records, where he recorded four studio albums and a live set, beginning with 1973’s Mr. Magic Man. Although his chart-topping days were behind him, during his tenure with the label that Nipper built, Pickett delivered a handful of Top 20 R&B chart singles and remained a popular live draw.

While Pickett’s early career triumphs with Atlantic/Stax are well-documented and most of his classic albums are readily available on CD, the soul singer’s half-decade with RCA Records is too-often overlooked. This oversight will be rectified on September 4th, 2015 when Real Gone Music and Second Disc Records releases the two-disc Mr. Magic Man: The Complete RCA Studio Recordings. The set features all four of Pickett’s studio albums for the label – 1973’s Mr. Magic Man and Miz Lena’s Boy, 1974’s Pickett In The Pocket, and 1975’s Join Me and Let’s Be Free. The set also includes four rare bonus tracks that have never appeared on CD, 42 songs running some 148 minutes in total.

During his RCA years, Pickett worked with producers like Brad Shapiro, Dave Crawford, and Yusuf Rahman, recording at legendary facilities like Muscle Shoals Sound and Sigma Sound Studios in Philadelphia. Mr. Magic Man: The Complete RCA Studio Recordings was re-mastered by Vic Anesini at Sony’s Battery Studios and the set features liner notes by the Second Disc’s Joe Marchese. While not necessarily the most essential of Pickett’s recordings – I’d check out The Exciting Wilson Pickett or Hey Jude albums first – but for longtime fans of one of the greatest soul men of all time, Mr. Magic Man: The Complete RCA Studio Recordings fills a giant-sized hole in many a record collection.