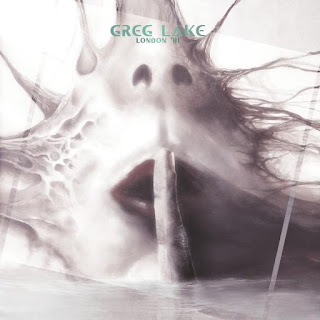 Greg Lake is best known as a founding member of King Crimson and, of course, and one-third of the prog-rock world-beaters that were Emerson, Lake and Palmer. The talented singer and multi-instrumentalist has dabbled in a solo career these past 30 years, releasing his self-titled solo debut album in 1981. Enlisting blues-rock guitarist Gary Moore and a studio band that included the E Street Band’s Clarence Clemmons and members of the band Toto, Lake ventured out of his prog-rock comfort zone to explore a guitar-driven, hard rock direction.

Touring in support of his debut album, Lake performed a legendary show at the Hammersmith Odeon in London on November 5th, 1981. The Greg Lake Band at the time featured Lake playing guitar, bassist Tristian Margetts, keyboardist Tommy Eyre, and drummer Ted McKenna, with special guest Gary Moore. The concert was recorded for a King Biscuit Flower Hour radio broadcast, and was originally released on CD in 1986 as Greg Lake In Concert. The performance re-appeared on disc again in 2004 as Nuclear Attack, but it’s been out of print for the better part of a decade.

On August 7th, 2015 Purple Pyramid Records – a subsidiary of Cleopatra Records – will be reissuing this classic concert on CD and vinyl as London ’81. Whether or not you’re an ELP fan (and the Reverend certainly is…), this concert is definitely worth your while. Lake and his skilled players crank out an inspired, high-octane performance of classic tracks by ELP and King Crimson as well as material from Lake’s solo debut. Recorded in front of 2,000 rabid fans, London ’81 offers up gems like “Love You Too Much,” a song co-written by Lake with Bob Dylan; “21st Century Schizoid Man,” from Crimson’s debut; Gary Moore’s enchanting “Parisienne Walkways,” and the ELP medley “Fanfare For The Common Man/Karn Evil 9.” Unlike previous CD releases of this frequently-revisited show, London ’81 includes a bonus track in the form of ELP’s “C’est La Vie,” recorded live at a 1981 show in New York City.