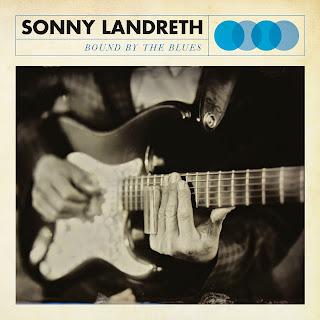 Although he’s enjoyed a solo career that dates back some 30+ years and includes ten overwhelmingly acclaimed albums, guitarist Sonny Landreth remains best known for his role as ‘sideman to the stars.’ Throughout his lengthy career, Landreth has played and recorded with artists like John Hiatt, John Mayall, Eric Clapton, and Jimmy Buffet, to name but a few. But since the release of his 1981 solo debut Blues Attack, Landreth has consistently delivered high-quality, guitar-oriented music that cleverly mixes blues, rock, folk, zydeco, and jazz into a sound that defines the Americana genre.

Bound By The Blues is Landreth’s first album since 2012’s Elemental Journey, the guitarist’s first totally instrumental work, one that incorporated more than a little jazz influence along with Landreth’s signature guitar-driven blues-rock sound. Landreth takes back the microphone with Bound By The Blues but, really, the new album is notable in that it represents the guitarist’s most blues-oriented effort since 2003’s The Road We’re On, which was also recorded with bassist David Ranson and drummer Brian Brignac. Although Landreth has never strayed too far from the blues he loves with his solo work, neither has he been afraid to experiment with other forms, challenging his talents as well as those of his band members.

Sonny Landreth’s Bound By The Blues


So what does Sonny Landreth’s first blues album in over a decade sound like? Well, Bound By The Blues opens with the deep Southern groove of Robert Johnson’s “Walkin’ Blues,” which is about as bluesy as one can get unless your name is Charley Patton. Landreth’s familiar, fluid slide-guitar slithers throughout the arrangement, the band banging and crashing nicely in developing a chaotic rhythm behind Landreth’s warm vocals as his guitar leaps out of the speakers and grabs you by the ears. Landreth’s original title track keeps the raucous vibe going strong, the singer name-checking his musical heroes like Jimi Hendrix and Muddy Waters while picking out a strong, affecting guitar line. Landreth’s blistering solo here is washed in Delta mud, soaring and swooping like the ghosts of a dozen long-dead Mississippi bluesman laying down a juke-joint stomp.

A cover of Elmore James’ beautiful “It Hurts Me Too” displays the perfect balance of blues and soul, the mid-tempo ballad built on a swaying Chicago blues rhythm but featuring plenty of Landreth’s signature guitar tone and technique, his emotional vocals supported by considered guitarplay that, while reverent in honoring the original, threatens to leap over the edge nonetheless with crackling electricity. The original “Where They Will” changes gears somewhat, the song’s slightly exotic rhythms matched by Landreth’s somber vocals and scraps of subtle, almost understated guitar that explodes with the singer’s refrain “let the blues takes me where they will,” his haunted voice increasingly supported by graveyard fretwork as the song’s protagonist stares down his own mortality. It’s a subtle but strong performance, one that nicely showcases Landreth’s underrated talents as a singer and songwriter.


A lively cover of Skip James’ “Cherry Ball Blues” is less serious than its predecessor on the album, Landreth putting a little more twang into his reading of the lyrics, cutting loose with a red-hot barrage of notes that flows like molten lava beneath the band’s explosive rhythms. Landreth’s solo at the two-and-a-half mark veers dangerously close to heavy metal territory, combining the blues-influenced hard rock edge of, say, Robin Trower or Pat Travers with Landreth’s undeniable sense of the genre. Landreth ventures further onto blues-rock turf with “Firebird Blues,” his tribute to the late Johnny Winter.

A heartfelt instrumental track, Landreth pours his grief and loss into a phenomenal performance on “Firebird Blues” that honors the history of Texas blues, from Blind Lemon Jefferson and Blind Willie Johnson through Lightnin’ Hopkins and Winter himself. What better way to further pay tribute to Winter than to re-visit the Johnson songbook via Elmore James and a rowdy version of “Dust My Broom”? Landreth shakes the arrangement up a bit, his take on the blues classic a little looser, but no less swinging, the guitarist coaxing some unusual tones out of his guitar while doing the song proud with a strong vocal reading that dances spryly on top of the jaunty rhythmic foundation constructed by bassist Ranson and drummer Brignac.

An equally effective cover of Big Bill Broonzy’s classic “Key To The Highway” skews closer to the Piedmont blues of the original than to Eric Clapton’s British blues perspective. Beneath his hearty vocals, though, Landreth lays down greasy, Louisiana swamp guitar licks that outpace either of the aforementioned artist’s efforts; Landreth’s imaginative playing moving in lockstep with the rhythm section. Bound By The Blues closes out far too soon with Landreth’s rockin’ original, “Simcoe Street.” A fleet-footed instrumental track with a locomotive rhythm and Landreth’s livewire fretwork, the song sounds like a contemporary take on the sort of boogie-infused blues-rock practiced by 1970s rollers like Foghat and Humble Pie.


If you’re already a Sonny Landreth fan – and how can you not be? – you don’t need to be told to run down to your indie record store and lay down your shekels for a copy of Bound By The Blues. But if you’re unfamiliar with the talents and charm of Mr. Landreth, or just a newbie blues fan altogether, the album is a great place to begin delving into the music of this (still) underrated singer, songwriter, and guitarist. Grade: A- (Provogue Records, released June 9, 2015)

Buy the CD from Amazon.com: Sonny Landreth's Bound By The Blues
Posted by Rev. Keith A. Gordon at Friday, July 03, 2015