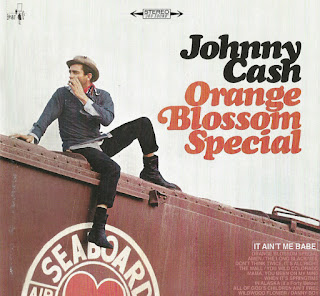 The importance of Orange Blossom Special in the evolution of Cash’s career is often understated. The previous year’s Bitter Tears: Ballads of the American Indian, featuring songs written by Cash and Peter La Farge, solidified the singer’s status as an activist and supporter of Native American rights and signaled a populist turn by the popular country star. With Orange Blossom Special, Cash began turning to songwriters outside of the Nashville machine, including three songs by Bob Dylan on the album – “It Ain’t Me Babe,” “Don’t Think Twice, It’s Alright,” and “Mama, You’ve Been On My Mind,” which had yet to be recorded by Dylan. By mixing traditional country, folk-rock, and modern country, as represented by Harlan Howard’s “The Wall,” Cash’s expanded stylistic palette would become a major influence in the creation of Americana music.

Exhibit Records has reissued Cash’s Orange Blossom Special on lovely 200 gram vinyl as a special, numbered limited edition album. Remastered from the original master recordings, and presented in an old-school gatefold jacket with liner notes, historical information, and rare photos, the “Box Car Series” version of Orange Blossom Special includes a tiny replica of the actual railroad boxcar that appears on the album cover, foil-stamped with a unique edition number. Exhibit Records is earning a reputation for releasing high-quality vinyl LPs across a diverse range of musical styles, from Cash and Maria Muldaur to the Dillards and Trini Lopez. Find out more on the Exhibit Records website.