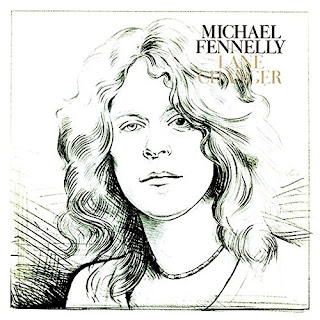 Singer, songwriter, and guitarist Michael Fennelly isn’t the most obscure of cult heroes, but his status as a critic’s darling and favorite of 1960s-era rock aficionados is undeniable. Hitchhiking from New Jersey* to Los Angeles at the tender age of 17, Fennelly was subsequently signed to a song publishing deal with musician and producer Curt Boettcher’s Mee Moo Music. Fennelly contributed to Boettcher’s studio project Sagittarius, and was a member of legendary pop-psych band the Millennium.**

By 1969, Fennelly wanted to pursue music with his own band. He hooked up with the members of a blues-rock outfit called Stonehenge, forming a new band named Crabby Appleton and earning a recording contract with Elektra Records on the strength of Fennelly’s original songs. Although the band’s self-titled 1970 debut barely charted, it nevertheless scored a Top 40 hit with the Fennelly song “Go Back,” the album displaying an invigorating mix of power-pop and boogie-oriented rock that would become the band’s signature sound. A year later, Crabby Appleton released its sophomore effort, Rotten To The Core, moving as a band away from 1960s-styled power-pop and into a harder rock direction. The album failed to chart, Crabby Appleton broke up, and Fennelly took time off the road to write new songs.***


Signed to Epic Records on the strength of his demo songs, Fennelly would record his long-anticipated solo debut album, 1973’s Lane Changer, in England. Produced by former Zombies bassist Chris White, Fennelly was backed by a number of England’s best, tho’ admittedly underrated musicians of the era, including bassists Dave Wintour (who had played with Rick Wakeman) and Jim Rodford (Argent, and later with the Kinks); and drummers Robert Henrit (Argent, and another future alum of the Kinks) and Henry Spinetti (who would later play with both Eric Clapton and George Harrison). White’s former Zombies bandmate Rod Argent and Argent’s Russ Ballard added backing vocals on several tracks. In-demand U.K. session horn players Mike Cotton and Alan Holmes augment a number of performances on the album with their immense sound, and Fennelly’s former Crabby Appleton bandmate Casey Foutz brought his keyboard prowess to the party.

In many ways, Lane Changer continues in a similar vein to Crabby Appleton’s Rotten To The Core; that is, hard-charging rock ‘n’ roll with pop and psychedelic undertones. The album-opening title track is an engaging slab o’ slippery hard rock featuring Fennelly’s lofty vocals, a busy arrangement with chaotic instrumentation, and rapidly-shifting changes in musical direction, all held together by Fennelly’s wiry fretwork which runs throughout the song. By contrast, “Touch My Soul” is a gentle, slow-paced ballad that mixes a folkish lyrical construction with touched of gospel grandeur and Fennelly’s soaring vocals. The highlight of the song, however, is Fennelly’s underrated guitar playing, which bolsters a wonderful vocal performance with both emotion and imagination. 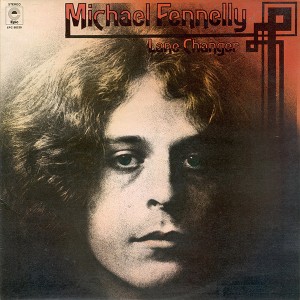 Jumping right back into high-octane, hard rock territory, “Won’t You Please Do That” is an unabashed Zep knock-off that expands that band’s classic sound even further with Fennelly’s hypnotizing guitar, explosive rhythms, and a call-and-response chorus that includes Argent, Ballard, and an unnamed “mystery singer” that sounds suspiciously familiar. “Dark Night” is more of a stripped-down affair, with Fennelly’s haunting vocals front and center in front of a simple bass/drums rhythm and flourishes courtesy of Casey Foutz’s Mini-Moog.**** It’s a downright beautiful song, full of texture and complexity, with a lot of musical invention hiding in the grooves beneath Fennelly’s soulful vocals and Foutz’s symphonic swells and electronic sojourning.

The solo performance “Easy To Love” displays Fennelly’s talents nicely, his acoustic guitar strum nestling right nicely up against his expressive vocals, which at times hit a tone not unlike bluesman Skip James’ voice on what is otherwise an engaging folk-rock ballad. “Shine A Light” builds upon its predecessor, adding drums and bass to an unassuming, mid-tempo rocker that offers some of Fennelly’s most inspired fretwork on Lane Changer, his breathless vocals punctuated by a short but lovely solo. On the other hand, “Bad Times” offers up some good ol’ ‘70s-styled dino-stomp with bombastic rhythms and blazing guitar, the song’s lengthy intro leaping, headfirst into a raging boogie-rock with Fennelly’s sly guitar leading the charge.

A stunning, guitar-driven rocker, “Watch Yourself,” features an uncredited Jeff Beck playing lead guitar while Fennelly himself keeps pace with an intricate rhythm guitar performance, his high-flying vocals presaging the rise of the arena-rock godhead. The album ends with a classic fake-out in “Give Me Your Money,” the song starting as a sort of jazz-flecked, late-night torch-song with a dark ambiance and syncopated rhythms driven by Foutz’s tinkling keys before bursting out into a fast ‘n’ furious boogie blast that, once spent, gives way to the song’s darker tones and slower pace. It’s a truly schitzo and altogether wonderful performance to close out the unique musical experience that is Lane Changer.


We have Sundazed Records to thank for the long-overdue release on CD of Michael Fennelly’s Lane Changer by Wounded Bird. In 2013, the esteemed archival imprint released the compilation Love Can Change Everything: Demos 1967-1973, which featured rare Fennelly material from the Millennium era, songs by Crabby Appleton, and from his solo albums. The success of that title directly (or indirectly) resulted in Lane Changer finally becoming available on CD for Fennelly’s long-suffering fans. Now if somebody would only reissue Fennelly’s other solo album, Stranger’s Bed, life would be one step closer to perfect.

Fennelly’s Lane Changer is an awe-inspiring collection of pure, inspired rock ‘n’ roll songcraft that, perhaps, in any other year, may have exploded into the mainstream and garnered the artist the success he deserved. But in 1973, a year that included big rock albums by the Rolling Stones, the Who, T-Rex, Mott the Hoople, Todd Rundgren, and David Bowie, among others, Fennelly’s equally superb effort was buried in a veritable landslide of great music that would achieve classic rock status. Thanks to the good folks at Wounded Bird (and Sundazed), though, we have another chance to appreciate the too-often overlooked talents of Michael Fennelly. Grade: A (Wounded Bird Records, released May 12, 2015)

Review Corrections
Michael Fennelly was kind enough to get in touch and set the record straight on several incorrect notions that have long surrounded Lane Changer, so the Reverend has made the following corrections to his review:

* Fennelly moved from New Jersey to California, not from New York.

** The Millennium was a band while Sagittarius was a studio collective that included members of the Millennium.

*** After the break-up of Crabby Appleton, Fennelly spent time off the road in the Hollywood hills; he didn’t move to England as was previously stated.

**** Rod Argent’s Mellotron playing credit on the song “Dark Night” as listed in the album liner notes is incorrect. It was Fennelly’s former Crabby Appleton bandmate Casey Foutz who made the magical sounds on the song with his Mini-Moog.

Also, Brother Steve Morley pointed out that Russ Ballard’s membership in the Zombies was fleeting, at best, and I’ve changed the text above to better reflect this.

For more info on Michael Fennelly, check out his interview with It's Psychedelic Baby! zine