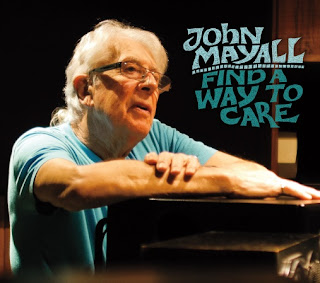 For anybody that’s been following the British blues ‘Godfather’ John Mayall’s lengthy career – spanning six decade and still going strong – knows that he’s been making some of the best music of his life here in the new millennium. Mayall’s 2009 album Tough was pretty bad-ass, while last year’s A Special Life can be counted among his greatest efforts (just behind Bluesbreakers with Eric Clapton, A Hard Road, Crusade, and Blues From Laurel Canyon in my humble opinion…).

Well, blues fans, hold onto your hats ‘cause fresh off the triumph that was Mayall’s look backwards at his early days (the amazing Live In 1967 with Peter Green) comes the bluesman’s much-anticipated follow-up to A Special Life (yeah, it was that good!). On September 4th, 2015 Forty Below Records will release Mayall’s Find A Way To Care in both compact disc and glorious black vinyl versions.

Find A Way To Care was recorded at the House of Blues Studio in Encino, California and produced by Mayall and Forty Below’s Eric Corne (Mayall also did the graphic design and artwork for the album). As usual, Mayall handles vocals on the album as well as playing piano, Hammond organ, guitar, harmonica, and other various instruments, and he was joined in the studio by his talented band of seven years – guitarist Rocky Athas (shouldn’t we be talking more about this guy?), bassist Greg Rzab (ditto), and drummer Jay Davenport. A full horn section was brought in to compliment several tracks on the album.

The album features an even dozen songs, including inspired covers of Don Robey’s “Mother In Law Blues,” Muddy Waters’ “Long Distance Call,” Lightnin’ Hopkins’ “I Feel So Bad,” and Percy Mayfield’s “The River’s Invitation,” among others. In a press release for the album, Corne says, “I really wanted to feature John's keyboard playing on this record. He’s truly one of the most lyrical, economical and underrated keyboardists around. We also wanted to change things up a bit after the success of A Special Life and the addition of a horn section on several tracks was a really fun way to do that. As good as the last album was, I think this one is even better.”

In talking about his choice of cover songs on Find A Way To Care, Mayall says, “every time I make an album, I always feel I owe it to my fans to come up with fresh and varied interpretations of the blues. With this in mind, I chose an assemblage of songs that includes perhaps some slightly lesser-known bluesmen, and that all had either different beats or special instrumental treatments. I also found three songs that would be further enhanced by the addition of horns.” The album also features a number of original songs written by Mayall and inspired by real life. “As always, I draw from my own experiences and thoughts about things in my life so that from album to album I create on ongoing musical diary of my life,” he explains. “The blues never lets me down!”

Check out the video trailer of the making of the new album below and then hie thee onward to Amazon.com and pre-order the album: John Mayall's Find A Way To Care