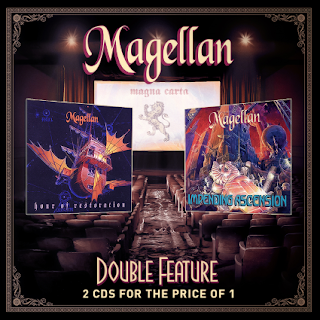 Formed in 1985 in San Francisco, progressive rock band Magellan was part of the second wave of neo-prog outfits that included bands like IQ and Marillion.  Singer and keyboardist Trent Gardner is architect of the Magellan sound, his brother Wayne serving as the band’s guitarist until his death in 2014.

Magellan released its debut album, Hour of Restoration, in 1991 on the fledgling Magna Carta Records label, following up in 1995 with their sophomore effort, Impending Ascension. Both albums have been long out of print but, thanks to the good folks at Magna Carta, they’ve been reissued as a budget-priced two-disc set titled Magellan: Double Feature which features both albums in their entirety.

Trent Gardner’s lyrics are often based on historical subjects, and so it was with Hour of Restoration, which musically explored the signing of the Magna Carta and its impact on the evolution of British society. Musically, the album is heavy on the to-be-expected influences of Yes, Rush, and Kansas – touchstones for much of the neo-prog bands of the ‘80s – but bearing Gardner’s unique musical signature. The band used a drum machine throughout the album, with guest Hal Stringfellow Imbrie adding bass guitar.

Long considered one of the true classics of prog-rock, Magellan’s Impending Ascension showcased significant musical growth within the band, building on the successes of its predecessor while displaying a more aggressive sound and better songcraft while not entirely abandoning its lyrical focus on historical subject matter (including the epic “Storms and Mutiny,” written about Ferdinand Magellan – the inspiration for the band’s name – and his sojourn across the globe). Jethro Tull drummer Doane Perry guests on the song “Waterfront Weirdos.”

Longtime Magellan fans will be overjoyed at the new availability of these classic albums in a single package, while any prog-rock fanatic would be well-served by Magellan: Double Feature.