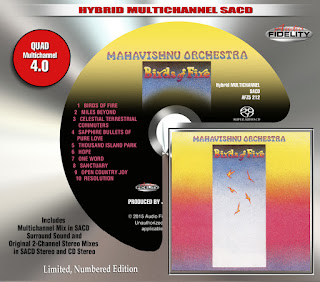 Along with Return to Forever and Weather Report, guitarist John McLaughlin’s Mahavishnu Orchestra were one of the creators and innovators of what we rockcrit types called – back in the 1970s – “jazz-rock fusion,” the combining of the two genres providing musicians with both the artistic innovation of improvisational jazz and the exploding freedom of rock ‘n’ roll music.

British-born McLaughlin was a veteran of both England’s R&B scene and the tumultuous U.S. jazz world of the ‘60s, making his bones playing with trailblazers like Graham Bond and Brian Auger before moving to the states and playing with Tony Williams’ Lifetime and Miles Davis. Forming the Mahavishnu Orchestra in 1971, McLaughlin enlisted a group of below-the-radar jazz and rock talents, the band including violinist Jerry Goodman (from The Flock), keyboardist Jan Hammer (who would later play with Jeff Beck), bassist Rick Laird, and drummer Billy Cobham (whose 1973 album Spectrum is itself a classic of jazz-rock fusion).

It was this talented musical roster that recorded Mahavishnu’s classic sophomore album, Birds of Fire. Released in early 1973, it was sadly the final studio album by this group (a live album with the original band members, Between Nothingness & Eternity, was released in late ’73). The follow-up to the band’s 1971 debut, The Inner Mounting Flame, Mahavishnu’s sophomore effort incorporated the primal rock ‘n’ roll energy of its predecessor with an ambitious, more experimental jazz edge that found an unlikely but adventure-seeking audience. Birds of Fire would peak at #15 on the Billboard albums chart (a feat no other Mahavishnu album would repeat, although subsequent releases would graze the Top 40.)

On August 21st, 2015 Marshall Blonstein’s Audio Fidelity label will provide Birds of Fire the deluxe sonic treatment it deserves when the label releases the album as a limited-edition Hybrid 4.0 Quad SACD. Mastering for the stereo CD and SACD was done by Kevin Gray at Cohearent Audio, while Gus Skinas oversaw the 4.0 analog to hi-def DSD digital transfer. Audio Fidelity’s Hybrid Super Audio CDs offer three layers on the same disc – a single layer of two-channel stereo sound, a dual layer SACD, and a 4.0 Quadraphonic Surround Sound layer; the Audio Fidelity Hybrid SACDs are compatible with all standard CD players. Provided this sonic upgrade, Birds of Fire promises to sound better than ever, the album a classic gem of jazz-rock fusion.

Buy the SACD from Amazon.com: Mahavishnu Orchestra's Birds of Fire