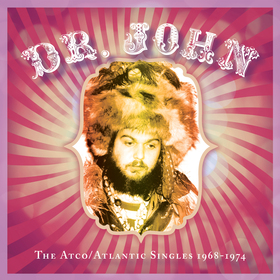 Mac Rebennack a/k/a Dr. John the Night Tripper, is one of the most colorful and talented figures in rock ‘n’ roll history. A true New Orleans music legend, he began his career playing sessions for famed producer Cosimo Matassa, working with local legends like Allen Toussaint, Professor Longhair, and Art Neville, among others. Rebennack would become an essential part of the Crescent City’s music scene, scoring a regional hit as an artist with the 1959 instrumental “Storm Warning” and working as a staff songwriter for Ace Records and as a producer and A&R man for labels like Ron and Specialty Records.

In the mid-1960s, though, Rebennack was facing some legal problems at home even while job opportunities were shrinking. A talented songwriter and pianist, he relocated to Los Angeles and picked up his career as a session player, contributing to hits by artists like Sonny & Cher and Van Morrison as well as working with producer Phil Spector. He launched his solo career in 1968, creating the “Dr. John Creaux the Night Tripper” voodoo witch doctor persona to sell his unlikely and unique hybrid of psychedelic-rock, blues, and New Orleans-flavored R&B. Rebennack would later shorten his chosen moniker to “Dr. John” and, signed to Atlantic Records’ Atco subsidiary, would release his solo debut, Gris-Gris, in 1968.

Throughout the remainder of the ‘60s and well into the 1970s, Dr. John would build a cult following with his flamboyant stage show, where he would often wear Mardis Gras costumes and headdresses. This would be a prolific period for the veteran musician, Dr. John recording seven albums for Atco in six years, including often-overlooked gems like his 1972 album Dr. John’s Gumbo, an inspired collection of covers of classic New Orleans R&B and jazz, or the previous year’s The Sun, Moon & Herbs, which included guest performances by Eric Clapton, Mick Jagger, and horn players Bobby Keys and Wayne Jackson.

Dr. John would mine gold with 1973’s In The Right Place. Backed by fellow New Orleans legends the Meters, Rebennack scored a Top Ten single with the classic “Right Place, Wrong Time,” which pushed the album into the Top 30, and the song “Such A Night,” which peaked at #42 on the charts but has since become equally as popular through its frequent use in movie soundtracks and TV shows.

Dr. John’s legacy as a pop-rock songwriter and performer is often overlooked, but will receive a new evaluation on September 18th, 2015 when archival label Omnivore Recordings releases The Atco/Atlantic Singles 1968-1974, a 22-track compilation that includes all the A and B-sides from Dr. John’s singles for the label. There’s a lot of fine music to be found in these grooves – New Orleans R&B, traditional zydeco, soul, and rock ‘n’ roll, including songs like his biggest hit, “Right Place, Wrong Time,” as well as “Iko Iko,” “Cold Cold Night,” “Loop Garoo,” “I Walk On Gilded Splinters,” “Such A Night,” and “A Man of Many Words,” which features Buddy Guy and Eric Clapton.

The list of producers involved making in these original recordings represents a “murderer’s row” of classic soul and R&B talents, including Allen Toussaint, Harold Battiste, Jerry Wexler, and Tom Dowd, and the track listing for The Atco/Atlantic Singles 1968-1974 includes some of the best songwriters of the 21st century, including Willie Dixon, Huey Smith, Buddy Guy, Allen Toussaint, and Dr. John himself.

The set includes extensive liner notes by critic and historian Gene Sculatti. Dr. John is a six-time Grammy® Award winner and Rock & Roll Hall of Fame inductee, and while he’s made plenty of great music over the decades, he’s seldom matched the quality and quantity of these late ‘60s/early ‘70s singles. Check out the video below for a taste of Dr. John’s heady musical gumbo and then get over to Amazon.com and order a copy of The Atco/Atlantic Singles 1968-1974.