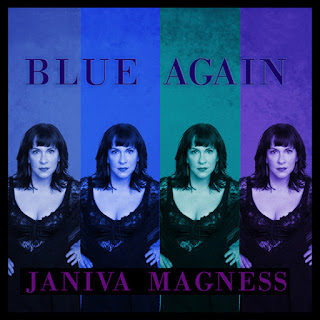 For my money, Janiva Magness is one of the great vocal talents in the history of the blues…and I’d gladly wallop non-believers with a dead trout than brook any criticism of her talents. A multiple Blues Music Award winner, Magness is only the second woman – after the legendary Koko Taylor – to be honored with the coveted “B.B. King Entertainer of the Year” by members of The Blues Foundation. Over the past quarter-century, Magness has released a handful of bona fide blues classics in albums like The Devil is an Angel Too and What Love Will Do.

Still, Magness has recently strayed somewhat from her blues roots to explore her long-dormant songwriting muse, providing fans with recent gems like 2014’s Original and 2016’s Love Wins Again which both explore pop, soul, and gospel music with sly originals, the latter of which earned Magness her first Grammy® nomination. For those longtime fans who want to hear the singer cut loose on a collection of classic blues and R&B tunes, however, wait no longer because on May 12th, 2017 Magness will release Blue Again on the Blue Élan Records label.

An inspired and diverse collection of songs by artists like Bo Diddley, Freddie King, Etta James, and Nina Simone, among others, Blue Again is more than just another ‘covers’ album. “The whole record is about getting back to my taproot,” says Magness in a press release for Blue Again. “The process was just digging through a large pile of some of my favorite material, my favorite classic blues songs, to come up with these, my absolute favorites.” Among the songs chosen by Magness for the album is Bo Diddley’s red-hot title track “Blue Again,” which features the molten guitar licks of guest fretburner Kid Ramos. Magness covers Al Kooper’s magnum opus “I Love You More Than You’ll Ever Know,” originally recorded with his band Blood, Sweat and Tears and later a hit for the great soul man Donny Hathaway.

Magness is joined by soul giant Sugaray Rayford for a reading of Etta James’ “If I Can’t Have You,” which was originally recorded as by James as a duet with Harvey Fuqua of the Moonglows while she shows obscure soul talent Joe Hinton some love by covering his little-known treasure “Tired of Walking.” Magness explains that the songs on Blue Again were the product of no little deliberation. “There’s definitely been an evolution, an arc over the course of time of the kinds of songs that I’ve elected to do and the kinds of songs I now write,” she says. “I wanted to bring that arc full circle. I wanted to make a record of what and where I come from. It was important to me emotionally and spiritually.”

If you want to hear the work of one of the best singers performing today, period, you owe it to yourself to check out Janiva Magness’s Blue Again in May…