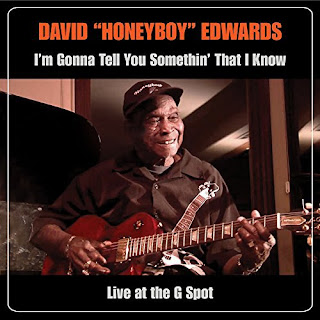 When David “Honeyboy” Edwards passed away in August 2011 at the ripe old age of 96 years, we lost the last living link to the origins of the Delta blues. Born in Shaw, Mississippi in 1915, Edwards was on the road by the age of 14, touring with Big Joe Williams. During a career that spanned ten decades, Edwards befriended – and performed with – Delta blues legends like Robert Johnson, Charlie Patton, and Johnny Shines but his status suffered during the 1970s and ‘80s when his talents and pedigree were often overshadowed by younger bluesmen.

With the help of manager and Earwig Records label founder Michael Frank, Edwards enjoyed a much-deserved career renaissance during the 1990s. Albums like 1992’s Delta Bluesman and 1997’s live The World Don’t Owe Me Nothing (released to accompany the bluesman’s autobiography of the same name) earned Edwards a new audience. Honeyboy was indicted into the Blues Hall of Fame in 1996; he was honored with W.C. Handy/Blues Music Awards in 2005 and 2007 for “Acoustic Blues Artist of the Year” and, along with old friends Pinetop Perkins, Henry Townsend, and Robert Lockwood Jr., Edwards earned a Grammy® Award in 2008 for their Last of the Great Mississippi Bluesmen: Live In Dallas album.

Honeyboy Edwards’ I’m Gonna Tell You Somethin’ That I Know


Sadly, all good things come to an end eventually, and Edwards’ death left a Mississippi Delta-sized hole in the blues world. Thankfully, one of Edwards’ last performances was caught on tape, resulting in the intimate live album I’m Gonna Tell You Somethin’ That I Know: Live at the G Spot. Recorded in September 2010, mere months before Edwards’ retirement from the stage, the two-disc CD/DVD set shines a light on the legendary bluesman’s unique, Delta-bred sound. The first three tracks – including the loping “That’s Alright,” which offers a deep walking groove, Michael Franks’ fine harp play, and Edwards’ funky guitar – capture the bluesman fronting a trio with just Franks and guitarist Jeff Dale. Their performance of Robert Lockwood Jr.’s “Little Boy Blue” smolders with a heat that threatens to ignite your speakers.

On the album’s seven remaining tracks, Edwards is joined by Dale’s band the South Woodlawners, which includes bassist Darryl Lieberstein, harp player Geoff Mohan, and drummer Clark Pardee. The full ensembles rips and roars through a solid, rockin’ set list of blues standards and Edwards’ originals, including a sizzling take on “Goin’ Down Slow” that evinces a haunting vibe and stinging fretwork. A cover of Robert Petway’s “Catfish Blues” gallops down the tracks with locomotive ferocity, with a concrete bass line and funky drumbeats juxtaposed against malevolent, razor-edged guitar licks. The great Muddy Waters’ is represented by a smoky, atmospheric performance heavy on late-night ambiance while “Sweet Home Chicago” is provided a muscular, mid-tempo rhythm on top of which Edwards lays down his knowing vocals, informed by a life lived.


Edwards’ I’m Gonna Tell You Somethin’ That I Know: Live at the G Spot finds the blues legend in fine form, his voice somewhat weaker than in his prime, but his performances full of spirit and experience and he clearly feeds off the energy of the audience. Jeff Dale & The South Woodlawners are good musical foils for the aged bluesman, providing the right amount of instrumental support and just letting ol’ Honeyboy’s immense charisma shine through. While this isn’t the album that a blues newcomer should introduced themselves to Edwards with – I’d recommend starting with Delta Bluesman and/or Roamin’ and Ramblin’ – it’s nevertheless a fine performance, both audio and video, by the last of the Delta blues heroes. Grade: B (Omnivore Recordings, released January 20, 2017)

Buy the CD from Amazon.com: Honeyboy Edwards' I'm Gonna Tell You Something' That I Know